I was just visiting at Captain Ed’s and look what I found: French Plan Engagement In Iraq. 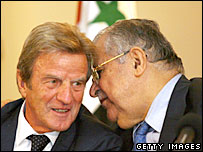 Sure enough, straight from the Times of London,

France proclaimed its desire to help restore peace in Iraq after a visit yesterday to Baghdad by its Foreign Minister ended the four-year diplomatic freeze that followed the US-led invasion.

As Paris media hailed “The French return to Iraq”, Bernard Kouchner concluded his three-day trip with a pledge that under President Sarkozy, France would no longer sit on the sidelines saying “we told you so”.

The BBC has more:

France’s disagreement with the US over Iraq was now in the past, he [French Foreign Minister Bernard Kouchner] said.

I knew that Kouchner had writte The Black Book of Saddam Hussein and all that, but to hear that the Sarkozy government is taking this very bold move is amazing. Not only because it signals a complete reversal of the UMP’s Iraq policy of the Chirac years but also because Sarko is no fool and would not be siding with the losing team at this point in the game.

Still, there are a couple of things to keep in mind. As Ed correctly points out,

The UN route will likely be the only way in which Sarkozy can provide assistance to the US due to France’s domestic politics, which will do little in practical terms.

And then, of course there’s the bien pensant attitudes, such as the Times headline itself, “Paris vacates the moral high ground to give Washington a helping hand.” I’d say it’s more like, Paris finally reaches to moral high ground…