The Government of Colombia should be applauded and rewarded by approving the Free Trade Agreement, … so it can carry out more reforms and create more good jobs. By helping pacify the country, Plan Colombia is helping trade union members to have more jobs and better working conditions. By restoring the power of the state and the rule of law, President Uribe is promoting labor freedoms as well as other liberties.

However, Colombia Hurled Into The Cold – with a kiss

because there is some violence in a society that’s been engulfed by war for 44 years, 46 million Colombians are to be denied the right to free trade with America for as long as it takes for Congress to be convinced it’s over. That’s Congress’ idea of a solution. That’ll fix ’em.

The WSJ looks at this Trade Double-Cross (emphasis added)”

This unilateral high-handedness is even worse for the Colombia-U.S. trade pact, which Democrats seem prepared to kill outright. Colombia has been fighting the war on drugs for decades for the U.S., and suffering disproportionately for it. Popular President Álvaro Uribe, now in his second term, has reduced violence by almost every measure, including murder, terrorist attacks, robbery and kidnapping. But Mr. Uribe knows law enforcement is not the only answer to his nation’s ills. He wants to boost the economy through trade so Colombia’s poor, who are the most vulnerable to terrorism, can participate in democratic capitalism.

Good idea, right? Not to Democrats, who said Friday that they’ll oppose the pact on human rights grounds until they “see concrete evidence of sustained results on the ground in Colombia.” What Colombians think about their president and his policies is apparently meaningless. Mr. Uribe replied that he isn’t interested in “a relationship wherein the U.S. is master and Colombia a slave republic”; good for him.
…
All of this suggests that the real goal of the Levin-Pelosi Democrats is to put an end to further trade expansion.

Or, as Gateway Pundit put it, FARC You! Democrats Choose Terrorists Over Pro-US Colombia!

Update, Friday 6 July
Colombians are intent on turning their country around: 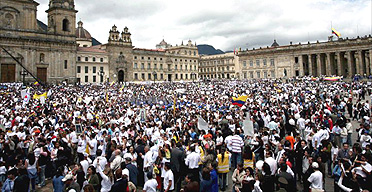 More than 1m protest kidnappings in Colombia
The size and scope of the demonstrations is unprecendented:

Hundreds of thousands of people protested in different cities from the Amazon jungle to the Caribbean city of Cartagena, to demand kidnap victims’ liberation.

The country is coming together:

The demonstrators took to the streets in major cities and small towns throughout Colombia, demanding “freedom without conditions now” for the people being held hostage by guerrillas, right-wing paramilitary groups and criminal gangs.

Protests or moments of silence were also organized abroad by Colombian embassies and consulates in Poland, France, Brazil and New York.
Gateway Pundit has more.

SPECIAL PODCAST THIS AFTERNOON 3:30PM Eastern
Monica Showalter of Investor’s Business Daily, Robert Meyer of Publius Pundit, and Gateway Pundit talk about Colombia, the US Congress and the Free Trade Agreement in this afternoon’s special podcast.
Join us!