UPDATED
While I was away on vacation Hugo’s been touring, so it’s time for the freshest news on Latin America’s biggest tinpot tyrant:

Not Sitting Still For Dictatorship

Of 46 suspected drug flights detected in the Caribbean by U.S. surveillance in the first four months of 2007, all but six originated in Venezuela.
…
But as Mexico cracks down on land shipments, and authorities get better at high-seas interdiction – the helicopters in the May 12 bust came off a British ship in the area – Venezuela is increasingly providing an alternative, counter-drug officials say.

Most Europe-bound cocaine is believed to pass through Venezuela, sent aboard ships and jets – 727s, DC-8s and Gulfstreams – to west African nations where enforcement is often weak and easily bribed, Hathaway said at the command’s headquarters in Key West, Fla.

The Chavez government is taking majority control of operations
US oil giant ConocoPhillips has said that a decision not to accept a minority stake in its operations in Venezuela may cost it $4.5bn.

The Economist: Exeunt Exxon and Conoco

Nevertheless, some Venezuelans worry that their country’s oil industry is going the same way as that of Iran, whose government is one of Mr Chávez’s closest allies. This week, as Venezuela’s president was due to visit Tehran on a tour that also takes him to Russia and Belarus, Iran imposed petrol rationing. Admittedly, Iran faces sanctions, and Venezuela does not. But national sovereignty does not automatically fill the tank.

Venezuelan dictator Hugo Chavez has expropriated $4.5 billion in assets from two U.S. oil firms. It’s an ugly loss, but they will live. What’s in doubt is Venezuela’s future.
…
Markets Wednesday offered a hint of what’s ahead, with Exxon’s stock ending 2% higher, leading the market upward on a down day, and Conoco ending flat.

Bear in mind that Exxon lost nearly a billion dollars in Venezuelan investments, and Conoco lost four times that much, amounting to 10% of its proved reserves.

Yet credit agency Standard & Poor’s declared Conoco’s rating undented by the move, and Exxon said it would “move forward,” probably signalling a bid to recover some of the value of its assets in U.S. courts.

But Venezuela is another story. Its currency, the bolivar, and its sovereign bonds both plunged as Exxon and Conoco announced they’re leaving.

Most Venezuela watchers saw a link. Standard & Poor’s, for instance, downgraded the country’s outlook, citing “a highly negative climate for investment, which results in virtually no foreign and private investment.”

Venezuela has strict capital controls on its currency, so the bolivar trades only in the local black market. Its value to the dollar fell from 4,050 to 4,180 yesterday as dollar demand for capital flight rose, Bloomberg reported.

Even the “official” rate of 2,150 bolivars to the dollar signals ruinous inflation, likely well above the most recent inflation rate of 19%. A lack of dollars has emptied store shelves of imported goods, causing food prices to shoot up.

This is a bad sign for Venezuela. Markets basically shrug when two major investors leave, while brutally punishing Venezuela’s government for its treatment of its U.S. investors. Chavez’s regime is like one of the country’s anaconda snakes, squeezing the very life out of Venezuela itself. Sadly, it’s part of a long downward slide that shows no end.

And yes, I have mentioned before that the Venezuelan economy collapsed a couple of decades ago when the oil prices dropped. 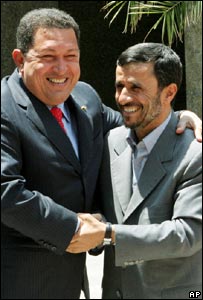 This was Hugo’s third visit to Iran during the presidency of Mahmoud Ahmadinejad, but he also visited old friends,

During his latest visit, which kicked off on Wednesday, Chavez met with Russian President Vladimir Putin and Belarus counterpart Alexander Lukashenko and urged a global revolution against Washington.

He has also discussed possible purchases of submarines and other defence equipment from Russia, arguing that these are needed to defend his oil-rich country against the United States.

Earlier this month Iran welcomed Nicaraguan President Daniel Ortega, a Cold War foe of the United States. Tehran has also boosted ties with other countries which have frosty ties with Washington, notably Belarus, whose president has been condemned by the European Union for rights violations.

Both Venezuela and Russia have revisited contracts signed in the 1990s with major oil companies, and slapped back tax claims on private companies.

While we ponder that, read Austin Bay‘s post on Putin’s anti-missile tantrum – expect to hear similar rumbles from Hugo sometime in the future. It would get him the attention he craves.

Publius Pundit’s posts on Russian Hypocrisy Knows No Bounds has a whole photo gallery of Hugo’s buddies. Start with this one:

Yup, that’s Hugo Chavez and Moscow Mayor Yuri Luzhkov laughing and holding hands like lovers whilst they gaze upon a spectacle of Russian folk dancing as part of Chavez’s state visit to Moscow.

And then there’s this
Via Sigmund, Carl and Alfred, Middle East should look to Latin America: Tariq Ali

Pointing to the success of Venezuela’s leadership under the seven-times elected President Hugo Chávez, the London-based historian, political campaigner and prolific author said: “Solidarity outside Venezuela is as important as solidarity inside Venezuela.”

According to the author of Pirates of the Caribbean: Axis of Hope (2006), a new level of unity lead by radical new leaders has had a “massive impact” on South America, and the region has broken down the isolationist policies driven by the United States through its ban on Cuba.

(For background on Tariq Ali, here’s a transcript of his debate with Christopher Hitchens from December 4, 2003.)

For now, he’s not going to Mercosur, and is even saying Venezuela may withdraw its bid to join the Mercosur trade bloc due to objections from congressmen from Brazil and Uruguay.

This situation in Venezuela could trigger other, even more dangerous developments. Hugo Chavez has been losing much ground lately, both inside and outside Venezuela. His “revolution” is doing badly at home and abroad, due to his numerous errors and his undemocratic style of ruling. In Spain, Chile and Brazil he has lost most of the goodwill he had been able to accumulate in the past. The Democratic Party leaders in the United States have recently supported a resolution condemning his aggressions against freedom of expression. He is aligning his regime, more and more, with failed states, such as Cuba, Iran, Belarus, Zimbabwe and Syria. Right now he is in Russia, trying to recruit Putin to form a global alliance against the United States. I consider that Hugo Chavez is, at this moment, one of the most dangerous political leaders in the planet. If he sees that his political situation becomes untenable he could well resort to a Plan “B”.

What could this Plan “B” look like? It could consist of provoking a global political crisis by starting a violent, military action against a neighbor or against a U.S. aircraft or ship in the Caribbean area. This could be followed by a cut of oil supplies to the United States, which could be particularly dangerous if Iran decided to join him in a boycott against the U.S., while Russia sat on the fence in apparent neutrality and vetoed or delayed any action in the Security Council of the United Nations. I believe Hugo Chavez is determined to go down in history as someone who went well beyond the limits of his native state of Barinas and made a big impact in the world, and he no longer cares if this impact will be good or bad.