The universal healthcare system in Hungary (PDF file) is financed through income tax and social-insurance taxes. 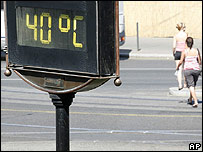 In the southern city of Kiskunhalas, the temperature reached a record high of 41.9C.

Here in the USA, the elderly and frail move to Arizona and Florida, where they swim in cooled swimming pools and a 30C day (86oF) in the Summer is an invitation to have dinner on the veranda.

In 2003 15,000 elderly and frail people died during a heat wave in France. Many died in the emergency rooms waiting for someone to bring them water.

For more on socialized healthcare disasters, Socialized Healthcare has plenty.