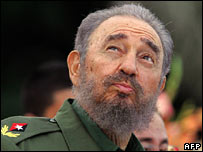 Fidel Castro has written a series of articles but not appeared in public
Cuba’s acting president, Raul Castro, is leading revolution day celebrations, filling in for his brother Fidel who was last seen in public a year ago.

And why would that be?

Update
Meanwhile, over in Venezuela…