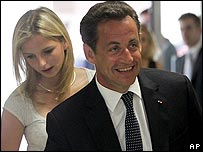 President Nicolas Sarkozy’s right-wing party has won a sweeping victory in the first round of parliamentary voting. According to TNS-SOFRES estimates, the right wing won between 405 and 445 seats, compared with 120-160 seats for the left.

Like in last May’s presidential elections, participation was extraordinarily high: France2 (link in French) reports that

Participation in legislative elections tends to be lower than in presidential elections, which means that the low record of abstentions (35.58% in 2002) might be beaten.

Projections after the first round of France’s parliamentary elections suggest President Nicolas Sarkozy’s party is heading for a landslide.

More at No Pasaran

Via Austin Bay, at MSNBC:

Such an outcome would be a remarkable personal endorsement for Mr Sarkozy, marking the first time in almost 30 years that an outgoing government has been returned to office. The previous UMP government was deeply unpopular and widely blamed for failing to tackle France’s unemployment crisis. But under the new president’s leadership the UMP is thought to have won the largest share of the vote for any party for 40 years.

The Guardian: “There is a sense of optimism in the air – a sense that we are on top of things”.

9:30PM: My friend Nidra Poller has an excellent op-ed at Pajamas Media.

Extreme Left, Extreme Right, and Socialists all lamented to the same basic tune: democracy requires a healthy balance between the party in power and the opposition. And not a single one of them acknowledged that the way to ensure that healthy balance is to appeal to voters and obtain their confidence. In the same way that they confuse equal chances with equal results, they confuse political freedom with guaranteed victory. We’re the opposition, so voters have to elect us…whether they like it or not.