Students go on rampage in China

Hundreds of students have rioted against the police in central China.

Witnesses said the unrest, in the city of Zhengzhou in Henan province, was sparked on Wednesday after a student was beaten by police.

She had been selling items on the street, apparently without a license. There was an argument and reports say officials broke her front teeth.

At this point other students began to gather round and witnesses say hundreds clashed with police and burned cars.

Meanwhile the North Koreans are firing missiles and the Lebanese are bombing Palestinians and no one at the G8’s complaining. Imagine if Israel was doing that…

Speaking of the G8, this would be a good picture for a caption contest: 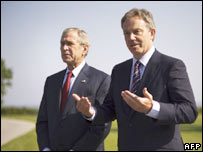 On the other hand, has anyone seen Hugh Laurie and Siggy in the same place at the same time?