Sigh no more, ladies, sigh no more,
Men were deceivers ever,
One foot in sea and one on shore,
To one thing constant never:

Then sigh not so, but let them go,
And be you blithe and bonny,
Converting all your sounds of woe
Into Hey nonny, nonny.

Sing no more ditties, sing no moe,
Of dumps so dull and heavy;
The fraud of men was ever so,
Since summer first was leafy:

Then sigh not so, but let them go,
And be you blithe and bonny,
Converting all your sounds of woe
Into Hey nonny, nonny.

Blogger appears to not be publishing my posts. I post them, they are entered as “published” but they don’t show on my page.

Anyway, I’m back home today and watching on TV the latest on the terrorist attack on Glasgow airport. Will post more later.

Update
“Police were scuffling with a gentleman”?
That’s no gentleman, that’s a terrorist

Sean has a great round-up and photos. A lot more at Hot Air

Update 2
The airport travelers knocked the suspects to the ground as they tried to flee the burning jeep.

Immigration Report: The Hispanic View:
A few reasons why many Hispanics didn’t want the immigration bill

My latest article is up at Pajamas Media, along with Rick Moran‘s Immigration Report: The Gringo View:
The fallout from the immigration fiasco spells trouble for the GOP

I’ll be on the road today. 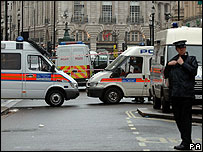 I’m leaving for Durham, but will post once I get there.
In the meantime, here’s an excellent post from Gagdad Bob, On the Backwardness of Progressives: Let Me Count the Ways

If you have donated to the Republican National Committee, you can call 202-863-8743 and ask for a refund.

In the house, Caucus vows fight if immigration pact reaches the House

WASHINGTON, D.C. – Members of the Immigration Reform Caucus (IRC) issued the following statements regarding the adoption of a resolution opposing the Kennedy-Bush amnesty bill by the House Republican Conference:

Chairman of the Immigration Reform Caucus Brian Bilbray: “The Kennedy-Bush amnesty bill is doing more to unify the Republicans in the House who believe that we are a country of laws. This resolution sends a clear message that we stand together in united opposition to any bill that rewards illegal behavior with amnesty.”

Rep. Ginny Brown-Waite (R-FL): “This vote is an affirmation of what my constituents and I have been saying for nearly two years now. The Senate amnesty plan is misguided and takes America in the wrong direction. With this vote House Republicans are sending a clear message to our constituents; amnesty will not fly in the U.S. House of Representatives.

Rep. Phil Gingrey, M.D. (R-GA): “As the Senate continues debating their misguided immigration bill, House Republicans have made it clear that we will not waiver from our principles of reform. Any legislation we enact must uphold the rule of law, secure our borders and benefit the American people and economy. The Senate bill simply does not pass the test. In 1986, Congress passed a terrible amnesty bill that was hailed as the solution to our illegal immigration problem. It only takes a quick glance around Georgia to realize the ’86 bill was a complete failure. The Senate should heed the lessons of that mistake; sadly, their current bill replicates it instead.”

Rep. Vern Buchanan (R-FL 13): “I disagree with the president and my colleagues in the Senate who support this bill. This bill rewards illegal behavior by granting amnesty to millions of illegal immigrants and is a slap in the face to those who played by the rules and complied with our laws. I stand with my constituents who feel our focus should be on securing the border, enforcing our laws, and creating a tamper-proof id card for non-citizens.”

Rep. Sam Johnson (R-TX): “Why on earth would we grant special status to those who knowingly violated our laws? We must secure our borders first and that must be priority number one for illegal immigration reform – not rewarding law-breakers with blanket amnesty.”

Rep. John Boozman (R-AR): “The plan offered by Senate is, ultimately, a reward for illegal behavior. We should not be granting a pass to millions of illegal immigrants, while others go out of their way to be in the United State legally. You can’t solve the problems of illegal immigration by making everyone legal. Leaders from both parties in the House have publicly stated their opposition to at least one major part of this plan, and I am glad to stand with my colleagues in announcing our disapproval of the Senate plan. If it comes to the House in its present form, I will vote against it.”

Updated with the audio link
Today I am a guest in Michel Martin‘s NPR show, Tell Me More.

It came about last week when I was lying on a beach towel (who was covered with more sunblock, sand, and sea water, the towel or I? We’ll never know) when my friend Josue Sierra called and told me that he had given my name to Michel’s producer. They were looking for a Hispanic conservative.

To make a long story short, yesterday afternoon The Husband and I headed to Norfolk, Virginia, to the local PBS affiliate, WHRO. We arrived early, but luckily right before a big thunderstorm rolled in.

A nice young man led me to the studio room where he’d connect to the Washington, DC studio where the show is recorded. At 2:55PM I was comfortably seated and prepared for the connection.

And then we waited for 20 minutes.

Once the connection problems were ironed out, the show started recording. Michel’s guests were Jan Donaldson of Hot Ghetto Mess.com, who was at the studio with Michel, Ana Marie Cox of Time.com (formerly Wonkette), who was calling from her office in DC, and myself.

The first item of discussion was the upcoming Democrat debate. Michel’s going to be one of the panelists asking the candidates questions.

We had been asked beforehand to provide the question we would ask, and here is mine:
For me personally, it is very important to know,
What would you offer as incentives to entrepreneurs like myself – who hold MBAs and have sponsored foreign programmers – so we can continue to attract the best and brightest workers, and keep them?
And also,
How do you propose to reduce the costs and the barriers entrepreneurs like myself face now?

I hope the question makes it to the debate.

The conversation was animated, amusing, and amicable. I had a great time, and hope to be able to do it again soon.

One side note: After living the traffic in the North East, I am amazed at how little traffic there is in the Durham, Raleigh, and Norfolk areas by comparison.

On the way back The Husband and I stopped at a nice restaurant for dinner and enjoyed a very pleasant evening by the sea.

Not a bad way to spend a vacation afternoon, not bad at all.

The show airs today. Check your local NPR station for times. Here’s the live stream for all NPR shows

Update
Here’s the audio to the segment. You can also access it from here

Via Huber,
Reason on Line uncovers the scandal: Castles Made of Sand IV: The Revenge — This Time It’s Personal

Is this from The Onion?

The article’s in the New England Journal of Medicine: Sudden Death from Collapsing Sand Holes. Where the NJEM goes, can CNN be far behind?

Or, as a commenter in the Reason post says,

WATCH WHERE YOU’RE GOING
You can thank me later. Nominations to the Nobel Prize for Medicine are deeply appreciated.

(Later today I’ll go to the beach and photograph one of these lurking dangers as a public service to my readers.)

Update, Saturday June 30:
I did go to the beach that day and photographed, but wasn’t able to post the photos because I was too lazy until today. So here you have them:

Holes to China, or craters of death?

This one has a lethal weapon ready to chew your toes: