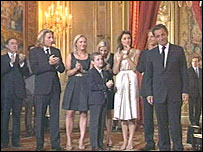 At the WaPo, Nicolas Sarkozy takes over as France’s president

In his inaugural address in the gilded Salle des Fetes, shortly after his predecessor drove off into retirement, Sarkozy vowed he would not disappoint the French people.

“There is a need to unite the French people … and to meet commitments because never before has (public) confidence been so shaken and so fragile,” he said in an apparent dig at Chirac, a former political mentor with whom he now has strained relations.

He also pledged to put the fight against global warming and the defense of human rights at the heart of his foreign policy.

The BBC emphasized a different aspect,

Mr Sarkozy stressed that “now change is needed” in France, in his inaugural speech, and called for national unity.

France “needs to take risks and follow initiatives,” he said.

The country also needed to “rehabilitate the values of work, effort, merit and respect” and defeat intolerance, he said.

— Nicolas Sarkozy, sworn in today as France’s president, called for a “fight against the fear of the future” as Jacques Chirac’s 12-year reign ended.

There’s much speculation over who will he choose for his cabinet. 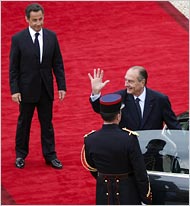