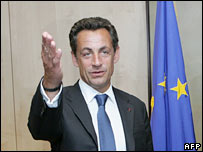 A friend just IM’d this link from LGF:
France to Pay Immigrants to Return Home

Immigration is one of the key problems of our times. Sarko’s under pressure to carry through his campaign promises because of the upcoming legislative elections of June 10 and June 17, so this is one key issue where he has to take immediate action, and he has.

New French President Nicolas Sarkozy made immigration a central issue of his campaign. Now, his new minister for immigration and national identity says its time to start paying immigrants to leave the country.
…
New immigration minister, Brice Hortefeux, confirmed on Wednesday that the government is planning to offer incentives to more immigrants to return home voluntarily. “We must increase this measure to help voluntary return. I am very clearly committed to doing that,” Hortefeux said in an interview with RFI radio.

Under the scheme, Paris will provide each family with a nest egg of €6,000 ($8,000) for when they go back to their country of origin. A similar scheme, which was introduced in 2005 and 2006, was taken up by around 3,000 families.
…
The new minister voiced concern that the majority of legal immigration into France was that of existing immigrants bringing in relatives, while only a small proportion were granted visas due to their professional skills.

As I interpret this, it would mean that families who are legallyin France would be given an incentive to return to their countries of origin to be reunited with their families instead of trying to bring more unskilled relatives to France, many of which end on welfare.

Additionally, the article states that plan provides individuals with money, instead of wasting it on foreign aid which so frequently ends in the pockets of corrupt politicians.

This is a creative and interesting solution.

While last year he had suggested that illegal aliens who were long-term residents may be allowed to vote in local elections, Sarko’s position was that there would be no amnesty, and his new minister insists,

Hortefeux is also talking tough when it comes to dealing with illegal immigration, insisting that there are no plans for a mass legalization of the estimated 200,000 to 400,000 illegals in France.

A couple of days ago I was saying

The Republican candidate that manages to do a campaign running against the Bush administration, strong against illegal immigration and strong on winning in Iraq and Afghanistan, will be the winner in all of this. It can be done, and I suggest that the candidate considering this course of action call Sarkozy’s campaign manager. He did it.

Francois Fillon‘s going to be busy in his new job as Prime Minister but maybe he’ll take calls in his spare time.

Meanwhile, over at the EU…