UPDATED
My guests were Thor Halvorssen, President and CEO of the Human Rights Foundation, award-winning bloggers Daniel Duquenal of Venezuela News and Views and Miguel Octavio of The Devil’s Excrement, and oil industry expert Gustavo Coronel. You can listen to the archived podcast here. All of their blogs continue covering this story, please visit them for updates.

Thor made an excellent point,

“It’s important that we underline that, although we are constantly referring to the president of Venezuela, it’s not because he happens to be the cause of all this. It’s because he has chosen that the center of the government is him, nothing is above him. The separation of powers does not exist in Venezuela: the judiciary is subservient to the executive power, the National Assembly was elected with less than 15% of the votes cast, meaning that there was a huge abstention rate. So, for the interest of your listeners, Venezuela is about as self-centered in terms of government power as North Korea, or Cuba, is: Everything depends on the leader and what he wants done.

Here are the facts on the closing of the TV station:

You can read more about it at Free RCTV

Venezuela is well on the way of becoming a totalitarian state.

I wrote an article for Pajamas Media last February on the Enabling Law. Chavez is legally able to rule by decree, and, as Miguel stated, is pushing for a constitutional reform that would allow him to be re-elected indefinitely.

The government has built a detailed list – the Maisanta database – that documents the political leanings of 12.4 million Venezuelan registered voters. The list is routinely used to deny opposition supporters access to public jobs and government social programs.

Gustavo explained that the database is also used for denying identity documents like passports and ID cards they need to get around, like the [South African] apartheid system. Miguel also stated that the Maisanta database was distributed prior to the recall referendum and you can look up people by their identity number but also by name, and it will give information as to whether he signed against Chavez or not, whether he voted or not, whether he’s enrolled in any government programs.

Why does the closing of the TV station matter?
As Mora explains

It will get uglier. And there will be no media to cover it. The food shortages, the riots, the violence, the rage in the streets, the Chavista corruption – there will be no one to check it. The broad unity of the people and their big television station will be broken, and again, all that will be left is chavismo, the chavista monolith. This is a real beginning of the end for Venezuela.

And we may hear very little about it because the free press is fading fast.

The protests continued today, and RCTV vows to stay on, 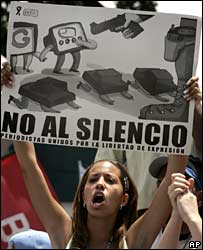 but Venezuelan Social Television is to begin broadcasting at midnight, using the same frequency occupied by Radio Caracas Television

The RCTV closing: the teachings on Venezuelan society