This morning’s top story in the France2 8AM newscast was the rioting in the Gare du Nord, one of the largest train and subway terminals in Paris. The Gare du Nord is also a terminus for the Eurostar trains.
In French:

Officers and police dogs charged at groups of marauding youths, some of them wearing hoods, who mingled with commuters and travelers at the Gare du Nord — one of Paris’ most important transport hubs.

“The inspectors were hit with projectiles, as were the officers who came to assist them,” said Luc Poignant, an official for the Force Ouvriere police union.

But youths at the station said Tuesday’s clashes started when police manhandled a young person of North African origin. Some claimed that the youth’s arm was broken in the confrontation.

Surely, “some” could actually show on the spot to the reporting media that it had been?

Reuters has a slide show of the rioting at the train station.

The BBC, however, shows that Violence spilled out of the station and on to nearby streets 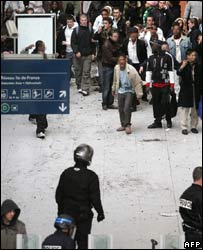 The youths who gathered in the Gare du Nord on Tuesday shouted insults about Mr Sarkozy.

They also chanted slogans of “police are everywhere, justice is nowhere” and “down with the state, police and bosses”.

The violence was sparked when a 33-year-old man without a ticket jumped over a barrier.

Transport officials said the man punched two ticket inspectors who asked for his ticket as part of a routine inspection. He was eventually arrested by police.

But a growing crowd felt that the police had used excessive force to arrest the man, and their protest turned violent.

The riots spilled out into nearby streets, where rubbish bins and street signs were set on fire.

It took the police eight hours to control the area.

In the fashion we’ve grown accustomed to expect from the Left, the Socialists say the hostility between police and young people is a direct result of the hardline policies of Mr Sarkozy, the Interior Minister.

Never mind that on the day before the rioting, March 26, Sarko had resigned his post as Interior Minister in order to concentrate in campaigning for the presidency.

Upon hearing that he was being blamed, Sarkozy replied (link in French),

“We are the only country where it’s considered that it’s not normal to stop somebody because he doesn’t pay for his ticket”.

Via Atlas, The Astute Blogger posts on the Sarkozy intifada. Indeed, France2’s 1PM news/talk show (link in French) speculated on how this riot might affect the election.

Others blogging on this:
Feisty
LGF reminds us of the law banning citizen journalists from reporting violence
Nidra Poller

In other words the “youths” felt that their fare dodging mate should not have been arrested. This is not noticeably different from the spark for the previous riots when the two kids got electrocuted under disputed circumstances. However that is not what I found most interesting. What is interesting is the identity of the various witnesses quoted by AP.

Firstly there is “Commuter Cyril Zidou, a 24-year-old electrician”, then there is “Another commuter, Guy Elkoun” and thirdly there is “Shopkeeper Mohamed Mamouni”. All three of these names are distinctly non-French, i.e. it seems highly likely that all three are of immigrant background. At least two, and probably all three, of them are apparently gainfully employed and therefore not the stereotypical unemployed immigrant that some sections of the media and the blogosphere would have you believe is the entire population of the Parisian suburbs. These people are in fact the ones most affected by the lawless “youths” and they are the ones that the rest of France needs to ensure stays loyal to France for the state to continue to rule the entire nation.

As Roger says, the article makes it clear that the “youths” have never really stopped rioting, the news media stopped covering it when the worst rioting stopped but nothing much else has changed. This means that the divide between the unemployed (and frequently unemployable) youths and the rest remains. And this in turn means that even though the riot isn’t directly related to the elections if unrest continues it is likely to have an effect on the polls. What effect is unclear.

Sarko can probably do a slopey shoulders trich to weasel his way out of responsibility for the continuing problems but he may be better advised to not do so. Part of his appeal is that he is willing to act and take responsibility for his acts so in this case he may want to take responsibility for failure to act completely as interior minister and then promsie to do better as president. While he has not yet done that, so far he seems to be the only candidate willing to stand up and say something .

More
Eurosoc
No Pasaran
You Tube, in French,

A blog for all
Tel-Chai Nation
Andrew Bolt
Jihad Watch

Welcome, Instapundit and Red State readers. I invite you to listen to my podcasts, and please visit often.

But rioters sought to shift the debate, saying it was all about Sarko, not their unwillingness to obey the law, get a job or assimilate into French society.

It’s unlikely the political shading of the act will be lost on French voters. The rioting amounted to a low-level intimidation effort, different only in degree, not kind, from the psychology of the al-Qaida terror attacks that hit Spain before its last election in 2004.

It worked in Spain. Voters there caved, giving the terrorists the weak leaders they wanted. Clearly Sarko, with his tough law-and-order stance, is someone the rioters would like to take down.

But there are signs political coercion in France might not work. Sarkozy remains a strong front-runner in the French race because voters seem to like his willingness to stand up for Western civilization, and he’s made no conciliatory statements to rioters so far.

If that holds, French voters may react as Americans did when Osama bin Laden threatened new terror attacks on any U.S. state that voted for George Bush — voting as hard against the threats as they can. Sarkozy is no U.S.-style conservative, but he thinks some things are worth defending. Let’s hope the French do, too.