As I mentioned last year French tabloid Charlie Hebdo was the only newspaper in France to publish the Mohammed cartoons. Back then they not only published the original cartoons but also added one on the cover that said, “It’s hard to be loved by so many idiots”,

As expected, a lawsuit is in the works, claiming racism (emphasis added): French magazine sued over cartoons

The editors of a French magazine which re-published the Danish cartoons of Islam’s prophet Muhammad will begin defending their right to free speech in a French court this week.

The satirical magazine, the Charlie Hebdo, is being sued by French Muslim organisation in the trial that opens in Paris on Wednesday.

The Grand Mosque of Paris and the Union of French Islamic Organisations accuse Charlie Hebdo of inciting racial hatred by reprinting the caricatures that sparked violence in the Muslim world last year.

Philippe Val, publisher of the magazine, has depicted the trial as a defence of free speech.

Politicians, intellectuals, secular Muslims and left-wing pressure groups have lined up behind Charlie Hebdo, arguing that Muslim groups have no right to call for limits on free speech.
…
In an act of solidarity with Charlie Hebdo, French newspaper Liberation printed the contested cartoons once more on Wednesday.

If convicted, the charge carries a possible six-month prison sentence and a fine of up to $28,530.

EU Referendum believes that “the case may well be one of the seminal ones in French legal history.”

Charlie-Hebdo‘s cover comments on the lawsuit, this time in a more ecumenical theme: 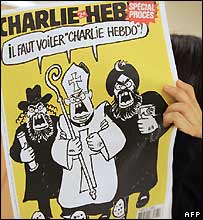 Charlie Hebdo must be veiled!

This is not the first lawsuit in Europe, or in France, on the cartoons: Last year I posted that a French judge rejected the CFCM complaint over a technicality. Additionally, the BBC reports that

In October, a Danish court rejected a libel case brought by several Muslim groups against the Jyllands-Posten.

The court in Aarhus said there was not enough reason to believe the cartoons were meant to be insulting or harmful.

A British Muslim man has been found guilty of soliciting murder during a London rally against cartoons satirising the Prophet Muhammad.
Umran Javed, 27, of Birmingham, was also convicted of stirring up racial hatred by a jury at the Old Bailey.

Across the Atlantic, al-Jazeera gets punked – with a Mohammed cartoon (h/t Larwyn). Will the mobs attack al-Jazeera? Or will they sue instead?

Update You might want to read Neo-neocon‘s impressions upon encountering the Palais de Justice last year.