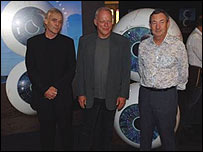 Pink Floyd eyeball up for auction

A pair of 6ft-high eyeballs signed by rock band Pink Floyd are being auctioned for charity.
The props were made to promote the Pulse DVD and will be open to bids on eBay from 14 December, with proceeds going to homeless charity Crisis.

I looked for the auction and apparently it’s not up yet, but will post the link when I find it. Beth sends the link:
PINK FLOYD EYEBALLS ***SIGNED BY MEMBERS***
As of this posting, the bid’s already over $10,000 (UK£5,700.00)
Does that include shipping?

and the DVD is today’s item at the Christmas Shop.

A Pink Freud t-shirt, and money to buy it all,

I love the black dress the back-up singers are wearing in the video. Nordstroms has a similar dress, party-perfect. I think I’ll order it.

Update Beth has Pigs on the wing