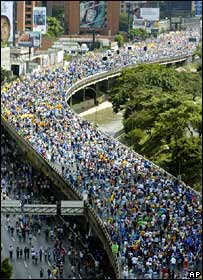 The round-up
AVALANCHA OF AVALANCHAS

While Chavez blocked the highways into Caracas, 1.4 million turned up.

Gustavo Coronel has A memo for Hugo Chavezs followers and for the Left who supports Chavez:

1. If you are not worried about Hugo Chavez being a “brother” of Fidel Castro, Ahmadinejad, Kim IL Sung, Assad, Hussein, Hezbollah and FARC, vote for him;
2. If it does not bother you that the main bridge between Caracas and the airport has collapsed and that the garbage piles up high in the streets of Venezuelan cities, vote for Chavez;
3. If you do not feel indignant at the ideological indoctrination being forced upon our children in public schools, vote for Chavez;
4. If you are indifferent at the arming of our youth by the Chavez government and their conversion into a paramilitary force, go ahead and vote for him;
5. If you think is logical that Chavez dedicates $20 billion to the buying of weapons, to the giving away of oil to Cuba, to building houses in Bolivia, roads in Jamaica, refineries in Brazil and to the exchange of oil for bananas with Grenada, vote for him;
6. If you sleep well in spite of knowing that Venezuelans die for lack of essential help in the hospitals run by the Chavez’s government, vote for him;
7. If you think there is no lack of ethics or dignity in the magistrates of the Supreme Tribunal of Justice when they sing in choir: “Uh, Ah, Chavez is not going”, go ahead, vote for him;
8. If you agree with the speech of the president of Petroleos de Venezuela, telling employees that if they do not vote for Chavez they will be dismissed, vote for Chavez;
9. If you believe that there are no abandoned children left in the streets of Venezuela and that women do no longer beg for food and a few coins in the streets of our cities, go ahead and vote for Chavez;
10. If you care more for the handouts you are getting on a daily basis than for freedom, democracy and human dignity, vote for Chavez;
11. If it does not bother you that Chavez travels around the world preaching hate in a $70 million Airbus, in a $3000 suit ad and wearing a $5000 watch, surrounded by Cuban bodyguards while the Venezuelan poor increase year after year, vote for him;
12. If you agree with the armed forces being at the exclusive service of the Chavez revolution, vote for him;
13. If you do not consider grotesque that the Vice-president of the republic is also an anonymous newspaper commentator, writing insulting op-eds against the opposition in the vilest language, please vote for Chavez;
14. If you do not feel curious about how the $200 billion of estimated oil income have been spent by Chavez during the last eight years, vote for him;
15. If you believe is normal for a country to have three parallel budgets, all handled by Chavez without accountability or transparency, vote for him;
16. If you approve of Venezuela having more undernourished people (FAO, United Nations), being one of the most corrupt countries on Earth (Transparency International), possessing one of the lowest levels of economic freedom (Fraser Institute) and showing a decreasing Index of Human Development (United Nations), go ahead and vote for Chavez;
17. If you are amused to see the president of your country singing off key in public events or disguised as a Mexican Charro, a Bolivian Indian or an Islamic fundamentalist, vote for Chavez;
18. If you think is positive to have a high level of racial and social tension in the country, vote for Chavez;
19. If you agree that political dissidents should be imprisoned, that Venezuelans who vote against Chavez should be retaliated against and that they get insulted systematically by the president, vote for Chavez;
20. If you like to watch the president of the country making an ass of himself in the United Nations, vote for Chavez;
21. If it is all the same to you that the government bureaucracy enrich themselves with our national wealth and give you the crumbs of the banquet, go ahead and vote for Chavez;
22. In summary, if you wish to see Venezuela joining the club of the failed states and Venezuelan society becoming more miserable than is already the case, vote for Chavez.

But, keep the following in mind:
You can choose to vote with your stomach or with your heart but be prepared to live with the results of your decision. If you vote to return to the Paleolithic you, your children and the children of your children will suffer the consequences. When you vote for Chavez you will be influencing the life and well-being of all those who do not wish to see their country falling in a swamp of misery, oppression and corruption. You should know that we would dispute Chavez and his followers day after day, millimeter after millimeter, the space and the future of our country. We, who wish to live in a dignified, free and spiritually and physically clean country, will never stay idle while the illiterates of the revolution, dressed in blood red garments, pretend to take over the country. This battle for freedom and democracy in Venezuela is going to be long and cruel but we will prevail.

We will wake from this nightmare no matter the price we will have to pay.