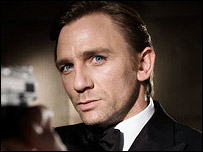 A while ago I was saying that what the 007 movies needed was Jack Bauer. Well, my prayers were answered, and I was woefully wrong about Daniel Craig:

Daniel Craig is the best Bond since Sean Connery. Connery created the part, but Daniel Craig brings him to life, a heroic task after decades and umpteenth Bond movies, a much more difficult task than Connery’s.

Casino Royale is relatively low tech and relies greatly on Craig’s physical abilities. Craig looks like the kind of guy that would win a bare-knuckle bar fight (wouldn’t surprise me if he has), and he adds much needed grit to the character. Like Jack in “24”, Daniel Craig’s Bond is a dangerous man. Bond got lost in much Saville Row finery when Roger Moore entered the picture, and nowadays, particularly after several seasons of “24”, nobody was going to believe the world’s best superspy if he wasn’t willing to get his hands dirty. Craig’s hands get dirty and bloodied.

This is a Bond that projects enough steel that you can believe governments trusting him with things of major importance.

At the same time, this is the Bond with the longest gun. Make of that what you may.

While the many 007s after Sean Connery always looked like they had freshly stepped out of first class, Daniel Craig looks scruffy enough that someone tosses him the keys to the Range Rover mistaking him for the guy working the valet parking. One thing for sure, when Bond takes the girl out to dinner to celebrate winning the game, Daniel Craig is the only Bond who would be sitting down to dinner with his collar open. Sean Connery’s Bond was from a different era; the following Bonds would have never neglected to wear black tie.

This is also the first time James Bond gets naked. Unfortunately at that point there’s enough sadism thrown in to curb your enthusiasm, but at least the writers worked in some humor. Craig has all the best lines, for sure.

In the middle of all the testosterone, the writers managed to construct a real plot and a love story. The very beautiful (and non-surgically enhanced) Eva Green plays the romantic interest, and there is real on-screen chemistry between those two. The chemistry is also helped by romantic locations at Lake Como. Since Casino Royale is supposed to be the story of Bond’s first big case, this love story goes a long way to explaining Bond’s later near-clinical cynicism towards women. Some broken hearts never really mend.

Judy Dench plays M and looks terrific. Bond wins an Aston Martin, which will delight the purists. James Bond gives out a Lillet martini recipe. Refreshingly there is no foul language. There’s no MoneyPenny, no Q, no souped-up turbo charged anything. Aside from some really fast laptops and a collapsing palazzo in Venice, the CGI people kept a low profile.

Considering the popularity of Celebrity Poker, it’s not surprising that the baccarat was phased out in favor of Texas Hold ‘Em.

The only thing I really didn’t like was a scene that takes place in the repulsive Bodyworlds museum show, a subject I had posted on last year. I wished we had been spared the Bodyworlds plug.

The action photography’s spectacular. The chase scene at the Virgin Airlines terminal at Miami airport was great (with even a quick cameo of CEO Branson) but not overplayed. Of course there’s product placement but you don’t mind. There’s new music and yet the traditional theme plays during the final credits.

Favorite scene: The tender moment in the shower. Melts your heart.

For the final scene, Bond’s wearing a three-piece suit and necktie. Let’s hope he hasn’t discarded his fighting clothes for the next film. One wants to see another smashing (in every sense) performance by Daniel Craig as 007.

Update, Monday, Nov. 20
Casino Royale vs the Global Orgasm for Peace? Your choice!
Update, November 21, I’m not the only one thinking Jack Bauer.