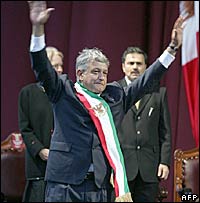 Now that AlGore’s a Weather God (*), someone else is taking the post of Biggest Loser in our hemisphere:
AMLO’s The Gift That Keeps On Giving: he’s inagurated himself, complete with presidential sash.

Mark In Mexico has pictures.

Let’s take a short stroll down memory lane with the aid of You Tube and watch AMLO swear up and down during his campaign (even to the political clown, a character I like) that he’d respect the outcome of the elections (in Spanish):

More on Mexico from Edward Gomez.

In case you were wondering where Hugo was going to get all the money to pay for all the billions he spent on his failed bid for UN Security Council seat, here it is:
Chavez to Transfer $7 Billion From Reserves to Fund Spending

Venezuela President Hugo Chavez, who seeks re-election on Dec. 3, plans to take about $7 billion in international reserves from the central bank at the start of next year to fund his social spending plans.

“Starting the year of 2007, the Central Bank of Venezuela must transfer to the government coffers the excess over the $29 billion in optimum reserves

And of course the deluded left will applaud the charismatic-leader-helping-the-poor-offering-free-health-care-education-adult-literacy-and-job-training-initiatives-that-help-millions-of-Venezuelanstm for that.

Peruvian President Alan Garcia is no friend of Chavez

Here in the USA the delusional left sees Cuba as a solution to LA’s healthcare woes – LA as in Los Angeles. Take a look at this: Cuba’s Example and What it Means for South L.A.

Cuba is a poor country, yet boasts some of the most impressive health statistics in the world due to its accessible health care system and universal coverage

I sent the link to the conference to several friends, among them Val:

Please note the banner. Can you name them all? I can name a bunch, including Malcolm X, Noam Chomsky, Gandhi, Nelson Mandela. Isn’t that Mother Jones next to che? What a pairing!

Why didn’t Cuban healthcare take care of this guy? Or maybe it did.

While I believe that the Germans invented magical realism, it sure doesn’t take much to understand why so many think all of Latin America is rife with it – it takes the Left to make it flourish.