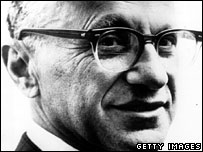 Milton Friedman, the Nobel-prize winning economist who helped shape and define free-market economic theory, died Thursday at the age of 94 in San Francisco.

A spokesman for the Milton & Rose Friedman Foundation confirmed the news to CNN.

Friedman, who won the Nobel prize in 1976, helped interpret and popularize modern free-market economics that came to dominate much of U.S. public policy in second half of the 20th century.

Friedman was regarded as the leader of the Chicago School of monetary economics and the leading proponent of free-market theory.

The Chicago School regarded the quantity of money as an instrument of government policy, capable of influencing inflation and business cycles, according to his biography at the Hoover Institution where Friedman served as a research fellow.

Dr. Friedman profoundly influenced my thinking,and even when I never met him, I am deeply grateful to him.

Update: Neo-Neocon has a tribute to Milton Friedman:

Friedman’s major achievement, the one for which he received the Nobel prize, was linking rising unemployment to rising inflation. He also suggested a remedy, one that’s generally been followed: to have the Federal Reserve keep the money supply growing steadily.

Here are some visuals for the imagination (I’ve seen Galbraith in person, by the way, and though far be it from me to doubt the veracity of the Times, he appeared even taller than this, if possible):

In forums [Friedman] would spar over the role of government with his more liberal adversaries, including John Kenneth Galbraith, who was also a longtime friend (and who died in May 2006). The two would often share a stage, presenting a study in contrasts as much visual as intellectual: Mr. Friedman stood 5 feet 3; Mr. Galbraith, 6 feet 8.

But–in a metaphor that’s almost inescapable–Friedman was a giant of a man.

(I did get to meet Galbraith a couple of times.)

While experience has not contradicted the statements I made, it has persuaded me that the dichotomy I stressed between economic freedom and political freedom is too simple. Even at this broad level, l am persuaded that it is important to consider a trichotomy: economic freedom, human freedom, and political freedom.
. . .
The essence of human freedom as of a free private market, is freedom of people to make their own decisions so long as they do not prevent anybody else from doing the same thing. That makes clear, l think, why free private markets are so closely related to human freedom. It is the only mechanism that permits a complex interrelated society to be organized from the bottom up rather than the top down. However, it also makes clear why free societies are so rare. Free societies restrain power. They make it very hard for bad people to do harm, but they also make it very hard for good people to do good. Implicitly or explicitly, most opponents of freedom believe that they know what is good for other people better than other people know for themselves, and they want the power to make people do what is really good for them.

If it weren’t for Milton Friedman, I wouldn’t be a blogger today.

More videos at You Tube.

Welcome, Instapundit readers.
While you’re here, you might want to listen to my Blography podcast.

Here’s a brief list of my favorite Milton Friedman books: