Frail Cuban leader Fidel Castro has stayed away from the opening ceremony of his 80th birthday celebrations in Havana on doctors’ orders.

A message apparently written by Mr Castro was read out saying he was not yet strong enough to attend the event.

Maybe he’s in a freezer, after all; maybe not?

The usual toadies were in attendance at the non-event:

Presidents Evo Morales of Bolivia and Rene Preval of Haiti have confirmed their attendance, along with former Ecuadorean President Rodrigo Borja and Nicaraguan President-elect Daniel Ortega.

Hugo: . . . but, but I even brought you an arepa [a Venezuelan cornbread], and a painting. . .
Fidel: I saw you with that Putin [pun on Putin’s name. Puta = whore, putin = little male whore], and with that Iranian, and you compared me to Ho Chi Min’s statue, it’s . . .
Hugo: But my chulo [term of endearment that can also mean pimp], all I’ve done. . .
Fidel: You’ve done nothing, all you’ve done is fool me, I gave you my youth, you got me pregnant and now I don’t know what I’m going to do, it’s over six months; you’re going to have to assume responsibility…
Hugo (covering his eyes): My God, you weren’t protected? You didn’t tell me. That’s not mine!
Fidel: You don’t love me.
Hugo: Don’t say that my little one, because I adore you with my life.
Fidel: I’m suing for child support.
Hugo: Now you’re squeezing me. . .
Fidel: Evil man (crying) abuser, whore . . .
Image changes to the Tierra de poderes/Brokeback Mountain poster.
Announcer’s voice: Tierra de poderes, the new soap opera.

Castro’s good friend and political ally Venezuelan President Hugo Chavez wasn’t expected to come; he is up for re-election on Dec. 3. But Chavez has promised to dedicate his anticipated electoral victory to Castro. 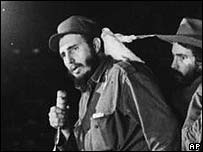 the Beeb’s article has a picture of the dove landing on Castro’s shoulder, an event considered as symbolic of his powers by believers in santeria. Do not underestimate the power of that image among his followers.

In a country where internet access is so limited by the government that a man’s starving himself in protest, the Beeb asks,

Are you in Cuba? How have people there reacted to Mr Castro’s inability to attend his 80th birthday celebrations? Send us your comments.

We live in an age of irony, indeed.