SCROLL DOWN FOR UPDATES

Cuba’s hosting the Movement of Non-Aligned Nations meeting in Havana this week. Andres Oppenheimer looks at petropopulism, authoritarinism, and the spread of poverty in Latin America in the context of the meeting: Populism and oil prices may rise and fall together

There are two ways of reading today’s headlines about Latin America: You can say that this week’s Movement of Non-Aligned Nations meeting in Havana illustrates the triumphal return of radical leftist regimes in the region, or you can say that it marks the beginning of their end. 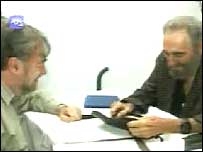 While the Poor nations look beyond Castro, a few of us are wondering if they’ll get at chance to actually look at him, since supposedly Fidel Castro may address NAM summit, and apparently he met with Argentinean writer Miguel Bonasso while in pajamas.

(Before you ask if I blog in pajamas, the answer is no. I blog fully dressed in my regular daytime clothes, which are probably best described as “casual Friday”.)

Fidel slams the ‘morally decadent’ US while wearing silk pajamas, seeing no irony between his statements, his garments and the fact that the minimum salary in Cuba is $10/month.

Either way, Cuba stays communist with or without Castro, at least according to Economy Minister Jose Luis Rodriguez (not El Puma, but a different guy with the same name).

In Colombia Colombian gangsters face sex ban, or so we are supposed to believe. To my cynical eyes, it looks more like a gimmick to promote a new rap song – which the women are selling.

In Mexico, Ballots from Mexico’s bitterly disputed presidential vote are to be burnt, despite a plea to keep them by President-elect Felipe Calderon.

Venezuela and London are a new oil-for-love match: Ken’s oil for brooms deal: fuel for us, a clean-up for Caracas. Will the million barrels of oil come from Venezuela, or from elsewhere? Update: Stephen Pollard sees the light.

Furthermore, I wonder if we are underestimating the ties between Mr. Chavez and the terrorists he seeks to exonerate. There have been rumors swirling lately of Islamic fascists using Margarita Island of the northeast coast of Venezuela as a base of operations. I’m sure they find the tropical beach resort a pleasant change from the mountains of Afghanistan and the slums of Baghdad, and Mr. Chavez may well prove a more welcoming host these days than Hamid Karzai or Nouri al-Maliki. Furthermore, as the global situation evolves, Margarita Island may prove a far more strategic base of operations for those whose mission it is to attack the United States. How about a map?

US Immigration and Customs Controls seized 2.222 tons of cocaine, on board a ship with Greek flag -called ‘Sierra Express’- that was docked in San Juan, Puerto Rico. The seizure was part of a successful operation code-named “Caribbean Corridor” in which FBI, DEA and coastguard operatives were involved. The vessel, whose port of origin was Puerto Cabello in Venezuela, docked in San Juan around mid day last Sunday.

Earlier this month Spanish and French authorities seized 3,5 tons of cocaine in the Canary Islands in a sailing boat coming from Venezuela.

El Nuevo Herald (in Spanish) estimates the value of the 2.2 tons to be $28 million. The drugs were discovered during a routine inspection. Additionally, there were no arrests, which I thought was incredible.

However, the French presumably made no arrests in the March 23 bust (where 18 tons were seized) but many arrests were made in April and late August. As Aleksander Boyd said, continental revolutions are extremely costly enterprises.

And they don’t go exactly as planned.

Update: Presidents Mahmoud Ahmadinejad of Iran and Hugo Chavez of Venezuela were among several leaders arriving in Havana Thursday ahead of the meeting of the Non-Aligned Movement (NAM), of which Iran will take over the presidency.

UPDATE 2 Babalu reader Daniel confirms that Brazilian newscasts have stated that all activities for today’s Non-Aligned Movement in Cuba have been cancelled and rescheduled for tomorrow.

No explanation given.
Update, Friday September 15 Maybe they were waiting for Kofi!