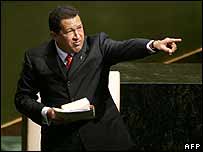 If it weren’t at the UN, it would belong at Comedy Central: Live blogging Chavez‘s speech, at Sticky Notes, has a few of the doozies. Musing Minds provides transcript.

AP notices that this is part of Hugo’s canvassing for a seat in the UN Security Council, or, as Pajamas Media calls it, one of the great moments in diplomacy.

Hugo Chavez had a spectacular moonbat meltdown at the U.N. today: The Political Pit Bull has the video, and says,

Chavez uses the word “inshallah”–arabic for “god willing”–when predicting that “U.S. imperialism” will end soon, which makes you wonder whether his terror-sponsoring buddy Ahmadinejad let him in on a little secret.

Hot Air will have more video later. Notice how he’s plugging Chomsky’s book Hegemony or Survival: America’s Quest for Global Dominance (go ahead, knock yourself out searching for it, but I’m not linking to it). A Hugo-Noam love match, for sure. The audience loved it. Update: BBC video.
The UN General Assembly video page (scroll down) has complete videos of all the speeches.

The Husband comments, “sounds like the kind of thing one hears from Nancy Pelosi, except for the references to God”.

And please, let’s move the UN out of the USA.

Mr Chavez went on to criticise the UN system which was “worthless”.

Enough of this kind of UN crap.

Let’s hope Hugo’s not going to be SNL’s next guest host.
A psychiatrist for Chavez: ¡Más rápidamente, por favor!

Iran’s Islamic rulers believe they are in real danger of an American air attack on their nuclear installations some time in November or December this year. They are therefore pushing hard for new allies in Latin America, Africa and Arabia and points of vantage for hitting back at the United States and its centers of influence on three continents as an effective deterrent to an American attack.