SEE UPDATE #4: RAUL TURNED UP
It’s Castro’s birthday and people are waiting for him and his brother to show up.

That’s what it comes down to.

However, I used to believe that the Germans frequently outdid the Latin Americans when it came to magical realism. After all, the Germans have Nobel winner Gunter Grass (formerly of the SS), several other writers that would give Gabriel Garcia Marquez and Isabel Allende a run for their communist money, and movies like Run, Lola, Run, and all of Wim Wenders oeuvre. But the Cuban news from the past two weeks has made me change my mind. Magical realism is alive and kickin’ in Cuba.

Granma has a brief item from yesterday saying that “a friend” visited “the Commander” and claims that “the Leader” has been having physical therapy, walked a few steps and engaged in animated conversation. The “friend” says that the Leader is “strong as a caguairan“, a totally new word to me. After reading the article twice I assumed the aforementioned caguairan is some sort of tree, but I couldn’t find the word in any of my dictionaries, or at the diccionario. What I did find was caguayo, a Cuban iguana similar to a chameleon.

In that chameleonic vein, CBS News has an article saying people are “tainting him [Castro] in their own likeness” as if one could taint what is already corroded – including the Episcopal pastor of the Matanzas diocese saying

Fidel is a man of big faith in many things

While the pastor wallows in moral equivalence, let’s not forget the 31,173 documented murders brought about by Fidel, whose faith in being supreme ruler of an island prison never ceased. Coincidentally, still, Matanzas means killings in Spanish.

As if Granma’s articles aren’t bizarre enough, and the flora/fauna imagery adds even more oddness to the story, Raul’s been missing for at least as long as Fidel. Captain’s Quarters points out,

This again begs the question: why hasn’t Raul just simply made a public appearance and put an end to the speculation?

In more chameleon-like news, the St. Petersburg Times has an article saying Raul: He’s the pragmatic Castro, while Ion Mihai Pacepa, who has actually met Raul several times, both in Cuba and in Romania, has this to say:

Raul was always under the influence – of alcohol and self-importance. My Cuban intelligence counterpart in those days, Sergio del Valle, who was Raúl’s closest associate going back to their early days in the Sierra Maestra, used to call his boss “Raúl the Terrible” in a semi-serious allusion to the first Russian to crown himself tsar. Raúl was Cuba’s uncrowned tsar – his official title was “Maximum General.” Fidel gave the speeches, hour after hour. Raúl ran Cuba’s economy, her foreign policy, her foreign trade, her justice system, her jails, her tourism – even her hotels and her beaches.

Raúl is generally perceived as a colorless minister of defense, but he has also been the brutal head of one of Communism’s most criminal institutions: the Cuban political police. I met him in that capacity. He was cruel and ruthless. Fidel may have conceived the terror that has kept Cuba in the Communist fold, but Raúl has been the butcher. He has been instrumental in the killing and terrorizing of thousands of Cubans, and there is no question in my mind but that he would fight tooth and nail to preserve his powers.

In particular, most relevant and most ominous, is Pacepa’s statement that

Khrushchev, Raúl, and Shitov -not Fidel – pushed the world to the brink of nuclear war.

I doubt that’s what the St. Pete reporter had in mind when talking pragmatism, but ponder that while you read that Hugo, after shaking his cabinet, is visiting the island-prison today.

Hugo’s birthday gift to Fidel? Along with cake and a cup, a dagger.

Symbolism floods the mind when one contemplates that detail. Venezuela News and Views looks at the situation:

Coming back from his journey to radical lands where Chavez has cast his lot against democracy, he is met with the disease of Castro (or death?). There is no time to waste and radicalization of the regime must start without even waiting for the symbolic election of December. Chavez must assume the leadership of the radical left in the Americas before Castro “officially” dies. This is a ncessary step for him to assume a leadership of sorts in the world since his pals (such as Ahminadejad, Lukashenko(*) or the Korean weirdo) are even less palatable than he is.

But back to Fidel: 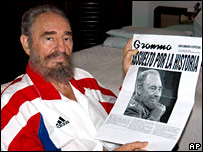 The Beeb and El Nuevo Herald have official photos of Castro looking decades younger, which we are supposed to believe are the first photos taken after his surgery (video here), along with a statement saying that he’s improved considerably, but,

Les sugiero a todos ser optimistas, y a la vez estar siempre listos para enfrentar cualquier noticia adversa.
(my translation:)
I suggest that you remain optimistic, while at the same time be ready to face any adverse news.

The photo, as you can see has him prominently displaying the front page of yesterday’s newspaper, something that Elephants in Academia compares to “a bizarre and somewhat morbid imitation of a photograph taken to prove a hostage is still alive”.

Or maybe he was playing checkers at the local senior center. But wait, the checkers picture is obviously fake: he looks too old compared to the new photo.

Update 3: Via Barcepundit, Sean Gleeson has more. Fools R Us:

The bottom line is obvious with anyone with a pulse. The photo on the left was taken years before the photo on the right. How stupid does the Cuban media think we are?

If any readers have any info on what year the Cuban Olympic Team(s) were wearing that jacket, we’ll be able to ascertain just how old is the photo.

Fox News also has the item.

Update, Monday August 14 I posted as a comment, in Sean Gleason‘s blog, If any readers have any info on what year the Cuban Olympic Team(s) were wearing that jacket, we’ll be able to ascertain just how old is the photo. Sure enough, Sean found this, taken in May 2002:

And now we have some pictures that were taken “yesterday”.