Fresh from his grand tour of Argentina, Portugal, Belarus, Russia, Qatar, Iran, Vietnam, Mali and Benin (no stop in Cuba, and no stop in North Korea, either), where Hugo went asking for support to the Venezuelan candidacy to a UN Security Council seat, Chavez recalls ambassador to Israel

to show his “indignation” over the military offensive in Lebanon.

“We have ordered the withdrawal of our ambassador in Israel,” Chavez said in a televised speech, calling Israeli attacks in Lebanon “genocide.”

“It is outrageous to witness how the Israeli state continues using gringo airplanes and its big power to cut apart so many innocents in Lebanon,” he lamented.

James Keller, co-pastor of the Providence Presybyterian Church, believes that “Venezuela deserves U.S. respect”. Jim just came back from a chaperoned tour of Hugoland. Jim probably believes Hugo when he says that if Venezuela gets a Security Council seat he will not indulge in ideological grandstanding. 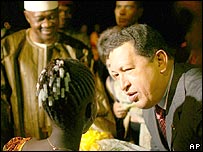 Not one to believe that money can’t buy love, Hugo’s spreading a lot of money. And how much money did Hugo spend on his shopping trip this time?

Bilateral trade last year between Iran and Venezuela was valued at about $1 billion.

The Vietnamese dollar amount apparently has not been made public. The Vietnamese, however, were not pleased over Hugo’s “radical, left-wing” rethoric, to use the Beeb’s own words.

I couldn’t find how much Hugo spent in Portugal, or in Qatar, but,

Following a short visit to Qatar and an appearance on the Al-Jazeera television network, Chavez arrived in Iran where he reiterated that Venezuela would “stand by Iran at any time and under any condition.” Iranian President Mahmoud Ahmadinejad described him as a “brother and trench mate.” Affinities between these two leaders go beyond their countries’ shared interests as oil producers and members of OPEC. They both have military backgrounds, an authoritarian vein and a self-aggrandized vision of their roles in shaping the world’s fate by defeating “imperialism.” More dangerously, Chavez, who also held talks with Iran’s Supreme Leader Ayatollah Ali Khamenei, supports the most radical positions of the Islamist extremists.

The Venezuelan regime’s praise of Hezbollah and condemnation of Israel has been expressed in more radical terms than that of some Arab governments. Chavez has extolled the virtues of Hezbollah’s asymmetric warfare, as an example of resistance against a superior military force, and stated his aim to model the Venezuelan reserves and the militias under his direct control after them.

Ponder that the next time you hear someone say that warning against Chavez’s danger is all a most fanciful conspiracy theory.

Hugo also has plans that

Apparently with parts from Russia, Belarus and Iran. Nothing personal, says Vlad:

Significantly, Russian arms deliveries to Venezuela have nothing to do with Chavez’s anti-Americanism or his striving to spite Washington. Russian defense producers say this is business, nothing personal, as the meeting between the Venezuelan leader and Russian President Vladimir Putin in the Kremlin showed.
Unlike in Minsk, the capital of Belarus, or Volgograd and Izhevsk in Russia, which Chavez visited before coming to Moscow, no political statements or criticism of the U.S. was permitted in the Kremlin. Putin is strictly adhering to his policy of avoiding membership in any “holy alliances”.

I wonder what Vlad thinks of Hugo’s hopes for Russia’s aid in the construction of a $20-billion natural gas pipeline.

Next in Hugo’s plans: Hugovision USA!

The Swedes have in the past sold anti-aircraft missiles, rocket launchers and anti-tank rifles to Venezuela worth around $150m (£80m).

Update Venezuela News and Views sheds some light on the subject.