Or, as Babalu puts it, fidel castro Death Watch, Take 2846 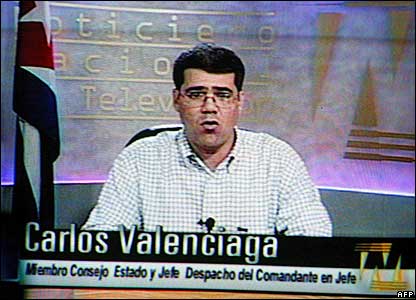 Castro, who will be 80 on August 13, said in a statement read out on television that he overexerted himself this month on a trip to a summit of South American leaders in Argentina and celebrations of his 1953 assault on a military garrison.

“This caused an acute intestinal crisis with sustained bleeding that obliged me to face a complicated surgical operation,” he said in the “proclamation” read out by his personal aide Carlos Valenciaga.

“The operation obliges me to remain for several weeks resting, away from my responsibilities and duties,” it said.

Kind of like Yasser. One boob at Reuters asks, Fidel Castro, socialist beacon or ailing despot? Neither, you fool: murderous tyrant.

The bloggers are all over it:
26th Parallel
Captain’s Quarters
Critical Miami
Cuban American Pundit
Dean Esmay
Dreams Into Lightning
Elephants in Academia, asking So what’s with this “interim dictator” thing?
Gateway Pundit has a picture that says it all.
Hot Air
It Comes in Pints?
Killcastro
Michelle Malkin
Outside the Beltway
Paxety Pages
Plains Feeder
Resurrection Song
Small Dead Animals
SondraK
Tiger Hawk
Ya No Mas!

Video of the official statement aired on Cuban TV
El Herald has the video (in Spanish) of the official statement, which was translated in the Reuters text above. The statement says that stress caused heavy intestinal bleeding that required surgery, which will require “several weeks of rest”, and since “the country is under great threat from the government of the United States”, Raul’s got the temp job, and fidel wants his birthday celebrated on December 30 instead of August 13.
Granma has the text in full.

I’m sure Hugo’s got plans on what to do next.

Update, 11AM
More reasons to think it’s a Yasser situation: Chavez worried about Castro’s health. Just a couple of weeks ago when Fidel’s whereabouts were unkown for several days, Hugo went on the record attesting that Fidel was “stronger than ever”.
CBS headline is already saying Cubans Wonder What’s Next: CBS’ Portia Siegelbaum Reports [from Havana] On Reactions To Fidel’s Bombshell (emphasis added):

We don’t even know for sure which hospital the Cuban leader is being treated at, or exactly what is wrong with him. Some people told me that based on what the letter signed by Castro said, they think he must have had a perforated ulcer.

The Miami Herald points out that After power shift, no word on Castro’s condition

As has become a habit by now, the Beeb disgraces itself yet again, Castro: Profile of the great survivor

I’ll do a search to see what the press from the big players in the Caribbean is saying:
So far, China has a plain-vanilla item.

Redstate is hearing from congressional sources that it has become apparent that the statement yesterday came after the surgery. This may indicate that Castro is in grave condition or is already dead.

7PM
France2 reporter B. Coq refers to Castro as communist dictator, never once calling him “president”, calls Raul an “orthodox communist, and point out that in Havana “there’s a police spy in every house”. They even refer to Evo and Hugo as his disciple. See for yourselves. Thank you France2.