While France2news had feverishly dedicated 2/3 of its nightly news every evening for the last 2 weeks, last evening they had not a minute of reporting France’s loss to Italy or ZiZou’s head butt. It’s as if the whole thing didn’t even happen. 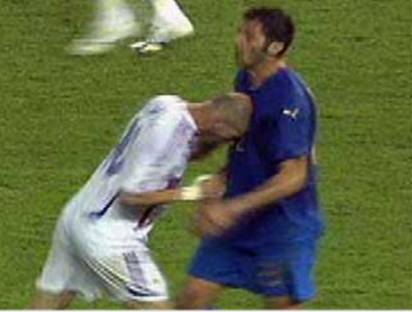 The BBC calls ZiZou a “flawed genius who played football from a different planet” with a “Mediterranean character, which he cannot always control”, so the other guy’s to blame. Never mind that, Zi Zou got the MVP award all the same.

But viewers of France2 news shouldn’t be too surprised. France2 hasn’t mentioned at all any of the incidents that Nidra Poler reports, and that Galliawatch itemizes:

In what was total chaos, “young people” (as the media call them) were blocking traffic on the avenues and in the streets, jostling the cars, yelling and threatening the occupants, forcing open the trunks of the cars to steal the contents, while the terrified occupants watched this torrent of barbarity. In many instances, the “blacks-whites-Arabs” did not hesitate to physically attack the drivers and the passengers.

Many drivers, mainly members of families who had simply come to enjoy the evening and share in the victory of the French team, were attended to by firemen who noted that many children, as well as some adults, were in shock.

Fights broke out when some drivers refused to get trapped and tried to break through the barriers formed by the “young” rioters, driving headlong into the crowd of “blacks-whites-Arabs” in order to escape from the mayhem. In the early morning hours, cars were torched in downtown Lyons.

In Marseilles, Toulouse and several other cities, there were many confrontations with the police, but none as serious as those in Lyons.

In addition to the above report, the following incidents occurred:

…a series of incidents took place in the department of Essonne. In all, the firemen had to put out about 40 trash can fires and 15 torched cars. In La Grande Borne de Grigny, two policemen were slightly injured by fire crackers, and in Etampes, stones and Molotov cocktails were thrown at the police. No arrests were made. In Evry, a car was turned upside-down and bus stops were vandalized on Boulevard des Coquibus. In Corbeil-Essonne, two people were arrested after rocks were thrown at the police station, another was arrested for drunk driving. In Draveil, 5 people were arrested for destroying property and throwing stones at the police.

In Grenoble, 12 people were arrested, mainly for throwing cans at the police. In addition there were trash can fires and one car was nearly burned. Fourteen people were slightly injured in fights.

In Dijon, 15 people were arrested in similar circumstances. In Montpellier a 24-year old man was killed by a stab wound to his throat. Eleven “youths”, about 20 years of age, were arrested, trying to escape…

Two policemen were seriously wounded in Deauville. About 30 “youths” attacked the two policemen when they arrested a young man who had just assaulted a woman. Simultaneously, in the near-by town of Lisieux, city property was damaged by a handful of “youths” who turned two police wagons upside-down.

Galliawatch says that satirical daily Charlie-Hebdo was about the only paper reporting on the wounded last Saturday during the third half-time of the game between France and Brazil. Charlie-Hebdo, a paper that on any good day can be described as a rag, has managed to report on that, and back in February, published the Mohamed cartoons. At least there’s one newspaper in France with guts, even if, as Dumb Ox correctly described, it is

The French media has made its choice.

In a lighter vein, via Dodgeblogium, Head-butt like Zidane!

Update, July 11 Bernard Henri-Lévy rhapsodises poetic about the “super-Achilles”, who, in the eyes of the uninitiated like myself, is just another jock with an impulsivity problem.
One jock says bad words to another. Now go away, or I shall taunt you a second time. Jonah Goldberg‘s looking for someone to head-butt Bernard Henri-Lévy