SCROLL FOR UPDATES
Pope Benedict will be visiting the Catholic Church’s fifth World Family Meeting being held in Valencia, Spain on July 8 and 9. Here are two items related to the visit:

This just in: More than 30 people were killed when a metro train derailed in the eastern Spanish city of Valencia on Monday

A fire brigade spokesperson said earlier that two carriages of the train had come off the rails in a tunnel.
. . .
The accident happened as Valencia was filling up with participants at the Catholic Church’s fifth World Family Meeting, which is to be attended by Pope Benedict XVI on July 8 and 9.

According to the Valencia metro website, the regional government-run company was distributing 500 000 passes to pilgrims and organisers of the event to permit them to travel freely on the system’s four lines. 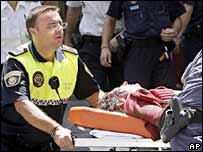 Of course, I wonder wondered if terrorism caused the derailing. The BBC states that

Officials quickly ruled out terrorism as a cause of the crash, with early suggestions pointing to speeding or a tunnel wall collapse as likely causes.

Update Manel emails to clarify that the cause of the accident was that the train was speeding. This article (in Spanish) explains that the wheels on one of the cars ruptured because of the speed the train was doing. The car overturned, and the next car rear-ended it while passengers in the first car were trying to evacuate.

Many of the train’s passengers had called emergency numbers describing the incident as it ocurred.

Traffic is at a standstill, and there are several field hospitals at the site.

Update 3 After reading those reports, there is no question in my mind that the derailing was definitely not terrorist-related. At MSNBC:

The likely cause of the accident was that the train was traveling at high speed and one of its wheels broke off, local government spokesman Luis Felipe Martinez said. A tunnel wall also may have collapsed onto the carriage, investigators said, according to news reports.

Update 4 Via Deambulando, 35 dead. A spokesman for the railroad worker’s union stated that it’s impossible to know the cause of the derailing without having an expert opinion.

Via Isaac, Pope Benedict will be visiting Valencia, Spain, and these guys will drop trou in his honor,

Why moon when you can take it all off?