Another reason why Sommers wasn’t allowed to stay at Harvard: he supports the ROTC. The same article says that filmmaker Patrick Dollard, a former Hollywood agent and manager, is working on a major documentary highlighting the heroism and bravery of U.S. Marines and soldiers in Iraq.

Today’s articles from Maria
Because Keller Says So: The elite media knows better than anyone

US ‘flag epidemic’ reaches peak on Fourth of July. Unlike the French, who never fly the tricoleur 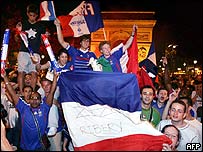 I haven’t seen anyone calling for a EU team, either.

Speaking of the EU, Finland, which is running the EU for the next six months, is to publish weekly news bulletins in Latin on its special EU presidency Web site. I expect that classicists around the world will rejoice.

Jeff Jacoby writes About our ‘dictator’.

Sheehan said she would drink only water throughout the summer.

What, no Faust lager? Update One way tickets, and a song for Cindy.