For over a year now, I’ve been posting about Hugo’s shopping spree in what The Economist calls “a spectre [that] stalks the Americas“. In February 2005 The Economist listed

In recent months, he has bought from Russia 40 Mi35 helicopters and 100,000 Kalashnikov rifles. He is negotiating for up to 24 Brazilian Super-Tucano ground-attack planes and four Spanish naval corvettes.

Hugo was barely starting to warm up back then.

By last January, Hugo had signed contracts valued at more than $1 billion with Iran – with a nuclear program in sight – and in February this year Hugo committed $500,000 million towards a Chinese space satellite.

This week the shopping spree continues. 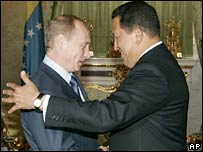 After visiting “fellow maverick” Belarussian President Alexander Lukashenko, Hugo went over to Russia, where Vlad sold him $3 Billion‘s worth of weapons, including

While Mr. Chávez doesn’t trust the officers in Venezuelan navy and air force, and the US has a weapons ban on Venezuela, Vlad needs the money, as

Moscow has cultivated ties with China and sought to forge its own line in the Middle East, restoring Soviet-era relations to regimes at odds with the U.S. such as Syria.

and Hugo’s trying to buy Venezuela a seat in the UN Security Council. No wonder people are asking, Chavez, Ex-USSR: A New Axis? Publius Pundit has an excellent round-up of posts on Hugo’s travels, which has scheduled upcoming stops in Qatar, Iran, Vietnam and Mali.

Speaking of Iran, Philomethean reports that an undetermined number of Iranians were present in North Korea earlier this month to witness that country’s multiple missile tests:

It’s quite plausible that North Korea would sell one or more nuclear weapons to Iran for a few billion dollars.

And the weapons can be carried by plane, of course. Coincidentally, just this week Iran and Venezuela signed an air transportation agreement note:

considering that a straight flight between Iran and Venezuela is not economical for neither sides, it has been agreed that this flight stops in an agreed European country and then heads towards its destination.

It’s not too much of a stretch to picture Belarus as the stopover, but would it be economical?

Once the jets and the bombs are in the Caribbean, Hugo’s not even going to need Fidel to be able to get within firing range of major US cities. Worse prospects await his neighbors.

Of course, I’m indulging in a most fanciful conspiracy theory, as Christian Oliver of Reuters would say.

and his little friend

Maybe Christian Oliver can join in the chuckle.

Just in case, let’ hope Hugo runs out of oil and money before the IOUs come due.