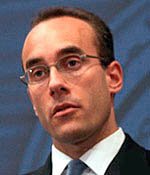 While the Sadriyyun lack the sophistication, weaponry and social welfare services of Hezbollah, both are funded by Tehran; and both organizations represent the same ethnic, religious and socioeconomic demographic within their respective countries. Mr. Sadr’s organization is, in fact, about where Hezbollah was 20 years ago.

Let’s ponder that for a moment.
More from Taranto.

Jimmy Carter, wearing a bra, that is. This friend came up with a suitable Freudian observation: “Subconsciously, artist may have wanted to portay JC as HC”. Update 2 The Anchoress says that Hillary looks like the love child of Jimmy Carter and Eleanor Roosevelt, but I think it’s more like Jimmy and James Carville.
Update, Friday, July 28 What has Steve Buscemi done to her? And don’t miss the video. The guy who did the Britney Spears giving birth statue came up with this beaut, too.

At the blogs
CNN Blogger Has Trouble Defining Terrorist: Tom Foreman, CNN Correspondent can’t seem to be able to define the term. Here’s where to start, Tom.

Meanwhile, at the UN,
First, an item you might miss: U.N. Employee Is Charged With Drug Smuggling, as part of a ring that brought 25 tons of contraband into New York in the past year and a half.

A Canadian U.N. observer, one of four killed at a UNIFIL position near the southern Lebanese town of Khiyam on Tuesday, sent an e-mail to his former commander, a Canadian retired major-general, Lewis MacKenzie, in which he wrote that Hezbollah fighters were “all over” the U.N. position, Mr. MacKenzie said. Hezbollah troops, not the United Nations, were Israel’s target, the deceased observer wrote.

After Kofi libelously accused the Israeli Defense Force of a “deliberate targeting” of four blue-helmeted U.N. observers, France2 (in French, available until 2-3PM EDT) reported that Kofi had apologized (2:30 minutes into the program), when in fact he didn’t. Kofi said he accepted PM Olmert’s words, and would order an investigation.

Claudia Rosett says, Who’s Dissin’ Whom: There’s a disproportionate response all right. Update, via Atlas, take a look at the area of Beirut that is actually being targeted. The Beeb continues to spread its poison with headlines such as Israel troops ‘ignored’ UN plea, a poison which is having its effect:

British Foreign Secretary Margaret Beckett has protested to the US about its use of Prestwick Airport in western Scotland to transport bombs to Israel.

Update, via Jane, and the propaganda’s effect is felt by many.

Call me a cynic (again!) but I forsee that the deceased observer’s email won’t feature prominently in Kofi’s investigation. Update, via SC&A: Neither will there be any mention of this:

What the video does not show is the result of the terrorist raid. The terrorists you see in the film murdered six Israeli soldiers that night, aided and abetted by paid employees of the United Nations Relief and Works Agency for Palestine Refugees (UNRWA).

One thing for sure, Kofi won’t be hiring Wretchard, who has a thorough analysis, and a hypothesis.

John Batchelor looks at Iran, the War Elephant in the room, through the lens of the Spanish Civil War, and silence and denial in EUrope.

As Richard points out, the EUropeans are not even in the game, while at the same time, they’re trying to get further out.

Neo-Neocon asks, What hath the UN wrought?, while Sigmund, Carl and Alfred, Dr. Sanity, and Shrinkwrapped analyze the situation.

Update Al Qaeda’s buzzards test their wings. They dream of flying “from Spain to Iraq”.

——————————
A reminder: Fausta’s blog has a new address. Please update your bookmark and your blogroll