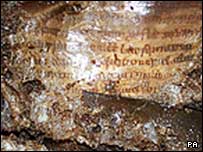 Fragments of an ancient manuscript found in an Irish bog are being hailed as comparable to the Dead Sea Scrolls. The Beeb doesn’t mention that the book was open on Psalm 83, which I found out from Kathy. Here’s Psalm 83

Psa 83:2 For, lo, thine enemies make a tumult: and they that hate thee have lifted up the head.

Psa 83:3 They have taken crafty counsel against thy people, and consulted against thy hidden ones.

Psa 83:4 They have said, Come, and let us cut them off from [being] a nation; that the name of Israel may be no more in remembrance.

Psa 83:5 For they have consulted together with one consent: they are confederate against thee:

Psa 83:6 The tabernacles of Edom, and the Ishmaelites; of Moab, and the Hagarenes;

Psa 83:7 Gebal, and Ammon, and Amalek; the Philistines with the inhabitants of Tyre;

Psa 83:8 Assur also is joined with them: they have holpen the children of Lot. Selah.

Psa 83:11 Make their nobles like Oreb, and like Zeeb: yea, all their princes as Zebah, and as Zalmunna:

Psa 83:12 Who said, Let us take to ourselves the houses of God in possession.

Psa 83:14 As the fire burneth a wood, and as the flame setteth the mountains on fire;

Psa 83:15 So persecute them with thy tempest, and make them afraid with thy storm.

Psa 83:16 Fill their faces with shame; that they may seek thy name, O LORD.

Psa 83:17 Let them be confounded and troubled for ever; yea, let them be put to shame, and perish:

Update Via The Anchoress,
In summary, the nations where the ten ancient people groups and tribes mentioned in Psalm 83 live today, are Lebanon, Syria, Jordan, Iraq, Saudi Arabia, and the Palestinian territories within Israel. Read also Gina Cobb‘s post.

——————————
A reminder: Fausta’s blog has a new address. Please update your bookmark and your blogroll