Check out the updates!

The worst Beeb bias yet?
France2 and the Beeb’s ME coverage has shown plenty of man-in-the-street interviews with Lebanese men (and a veiled woman or two) spewing bile against Israel, but Stephen Pollard finds The worst BBC bias yet

I can’t imagine that the BBC has ever broadcast a more poisonous or vile programme than this morning’s Andrew Marr show. It devoted – quite properly – the first half to the events in the Lebanon. But what was completely improper was that every guest – every guest – was simply nodded into the studio and handed air time to pour out as much anti-Israel bile as they could manage in their allotted slot. And there was not one slot allocated to anyone who thoiught that Israel might have even the basis of a case.

And Stephen hasn’t even touched on the loathsome HardTalk, with the obnoxious host and the straight-from-Hades fire & brimstone set. Meanwhile, via Linda, the NYT continues to spill secrets 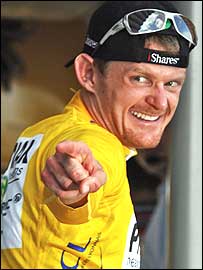 Floyd’s da man! (click on photo)
Floyd Landis Wins Tour De France I do not exaggerate when I say that the French were salivating over the prospect of regaining Tour victory after 7 consecutive years of Lance Armstrong’s victories. They’ll have to wait.
Update Government-owned France2 buried the Tour report 25 minutes into the broadcast, and showed it after a rather pathetic report on mountain biking.

A PR Miss U
In other earth-shaking news, Puerto Rican Is Miss Universe for the fifth time. I can safely predict that Puerto Rico will declare a day off so people can attend a giant parade that will deliver her from the airport to the governor’s mansion while San Juan traffic will be tied up for hours (a lot more than usual, that is).
Update More at Powerline

Condi in Beirut
I guess CBS News thought Dr. Rice was going to start by pressuring the Israelis: Rice Makes Surprise Visit To Beirut.
Update: And she’s not mincing words, either.

Pajamas Media’s Politics Central Leverages Global Editors for Continuous Stories and Exclusive Podcast Interviews. Check it out at Pajamas Media and at Politics Central, THE place to read about the ME, and don’t miss also the following:
Today’s ME articles from Maria:

Iran Against the Arabs: Unease grows over Tehran’s menace

There is no change of heart in Riyadh, Cairo or Kuwait. Saudi princes still finance Palestinian terror. Rather, the recent Arab tolerance toward Israel’s predicament and condemnation of Hezbollah signal recognition of a greater threat on the horizon. Wadi Batti Hanna, a columnist in Iraq’s Arab nationalist al-Ittijah al-Akhar daily, put it bluntly when, on July 15, he asked, “How long will the Arabs continue to fight on behalf of Iran?”

TownHall.com appears to be down, but here are a few articles if you can get through: Appeasing contempt of the Jews
Hugh Hewitt writes about What The American Left Really Thinks About Israel: Tom Hyaden Explains It All For You and links to Tom Hayden‘s post in the Huffpo:

It is clear that apocalyptic forces, openly green-lighted by President Bush, are gambling on the impossible. They are trying to snatch victory from the jaws of defeat in Iraq through escalation in Lebanon and beyond. This is yet another faith-based initiative.

If the American people do not see through the headlines; if the Democrats turn hawkish; if the international community fails to intervene immediately, the peace movement may be sidelined to a prophetic and marginal role for the moment.
. . .
The immediate conflict should not become a pretext for continuing the U.S. military occupation of Iraq. American soldiers should not be stuck waist-deep in a sectarian quagmire. Congressional insistence on denying funds for permanent military bases is a vital first step. Otherwise we will witness a tacit alliance between Israel and the U.S. to dominate the Middle East militarily.

Hayden is to be thanked for stating the real agenda of the Democratic Party’s dominant faction in bold and undisguised particulars.

Ralph Peters: CAN ISRAEL WIN? NOT THE WAY IT’S FIGHTING

STONE SINKS: NEW FLICK MISSES 9/11’S ESSENCE. I’m not surprised. As Podhoretz mentions, Oliver Stone said only a month after 9/11: “the revolt of September 11th was about ‘F— you! F— your order'”.

At the blogs
More Israel = Nazis, now in Barcelona, from Inside Europe: Iberian notes, who translated the signs.

Not related to the ME, ACLU Harassing Sheriff For Enforcing The [immigration] Law. ACLUseless