BEACH BLAST WAS ‘LAND MINE’. Kesher Talk posts on Pallywood: getting inside the news cycle. Last evening the Beeb and France2 newscasts shamefully continued to report the beach deaths as probably caused by Israeli bombs in spite of the evidence to the contrary. France2 even managed to show “a spokesman from an American NGO” (links via LGF) – an NGO financed by the felonious George Soros, who contemptously believes he knows what’s best for you.

Soros, after making himself a hefty $7.2 billion through the epitome of capitalistic activity, i.e., finance and hedge funds (and the breaking of the British pound in 1992), has now written a book against what he calls “market fundamentalism”, i.e.,

the belief that the common interest is best served by allowing individual participants to pursue their self-interest.

(Go ahead, knock yourself out looking for the book. I won’t link to it.) Speaking out both sides of his mouth, George says he hasn’t made enough money.

But he has a plan:

George and his pal, Maurice Strong — the man who would deny air conditioning for you to save the environment while sitting in an air conditioned boardroom somewhere in Communist China — the same Maurice Strong who was involved in the Oil-For-Food scam, are teaming up to “flood the American market with cheap Chinese made cars,” the Chery.

The “Chery” is a knockoff of the South Korean Spark, sold in the U.S. in partnership with General Motors. 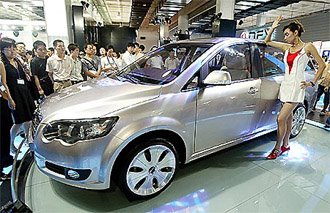 The Chery isn’t quite ripe enough for prime time yet, as Chery, the opening salvo in what is likely to be a tidal wave of Chinese imports into the U.S., is running behind schedule.

A reason for the delay is that Chinese cars, as originally designed, don’t stand a chance of passing US safety regulations, after failing miserably the EU’s crash tests:

The export of Chinese brand cars to Europe got off to an ominous start in Frankfurt. At the time of the show, numerous European media ran photos of a test dummy in a Landwind sports utility vehicle from China’s Jiangling Holding Co. The dummy’s head was crushed after a crash test in Germany.

A couple of months ago France2 news showed a video of the crash test and what remained of that car after the test would fit in a shoe box.

Another guy involved in the “tidal wave” of Cherys, Malcom Bricklin, tried to import Yugos to the USA.

That didn’t work out, but Malcolm collected $20 million from the failed Yugo, leaving dealers holding the bag.

Consider then, the Chery trio:
George Soros, felon.
Maurice Strong, Oil-For-Fooder
Malcom Bricklin, who left the dealers holding the bag.
The trio gives the Chery a pedigree the likes of which we haven’t seen since the FBI arrested De Lorean.

Would you buy a car from those guys?

Update, June 16: I hope Soros won’t be importing these.