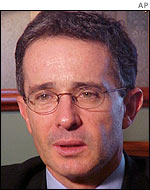 by Mary Anastasia O’Grady, in today’s WSJ is today’s must-read on South America:

The Uribe win is not only an endorsement of a worldview favoring security, the rule of law and global engagement for Colombia. It is also evidence of a backlash against the economic isolation and hostility towards private property preached by Mr. Gaviria [Ecuador] and Mr. Chávez [Venezuela] next door. As such it casts a ray of hope on the Andean region, which has been trending toward left-wing, authoritarian populism of late.

A low corporate rate goes against the tired old saw that high taxes on entrepeneurs make society fair, even though this model has left Latin America in poverty. But bucking conventional wisdom is Mr. Uribe’s trademark.

When he was first a candidate for the 2002 elections, Colombia was overrun with guerilla terror while the terrorists enjoyed a jungle safe-heaven the size of Switzerland, a courtesy of the government as an olive branch towards peace. The status quo favored this concession even though the rebels warred on, using the area to store weapons, hold hostages and organize assaults against the civilian population. Washington and Colombian “experts” counseled this perpetual “peace process”, while the human carnage wrought by guerrillas was mounting weekely.

Mr. Uribe saw things differently and said so: Appeasement of terrorists was making things worse. That observation got him elected and when he took office he ended the safe-heaven policy, beefed up the military and sent a message to the rebels that the Colombian people would defend themselves. Four years later, Colombia has not only regained territory but it has also recovered national confidence.

The article goes on to explain why Colombia should adopt a free-market tax policy like Estonia’s, whose Prime Minister, Mart Laar, advises “Do it fast and don’t let “experts” talk you out of it”. Colombia’s future hangs on it:

The battle for security will continue but as Colombian economist Mauricio Cardenas said recently, “It’s a mistake to think that the conflict must first be resolved for the economy to grow. We need economic growth in order to resolve the conflict”. To meet that goal there may be no single policy as powerful as the corporate flat tax.

I wish the WSJ would post Ms O’Grady’s articles every week in the Opinion Journal site.

Elsewhere in Latin America
Peru is holding national elections this Sunday, and of course, Hugo’s been meddling.

Venezuela: Hugo’s foot-in-mouth exacerbates: While at the OPEC meeting, Hugo calls Carlos the Jackal ‘a good friend’. Carlos the Jackal, whose real name is Ilich Ramirez Sanchez, is currently serving a life sentence in France for murder,

has testified that he led a 1975 attack that killed three people at the OPEC headquarters in Vienna, Austria. Among the 70 hostages seized in the attack was Venezuela’s then-oil minister, Valentin Hernandez Acosta. The hostages were freed in Algeria.

Hugo continues to break new ground in the field of brainless diplomacy. JSB posted the Hugo’s letter to Carlos.

Ecuador: Yesterday I said that Ecuador might be shopping for a better deal than Hugo offered when Hugo proposed the refining of up to 100,000 barrels of Ecuador’s crude oil a day in Venezuela. Well, what do you know . . . Now Chávez proposes binational oil refinery in Ecuador.

Bolivia is squeezing Brazil on natural gas with higher taxes on fields owned by Spanish-Argentine Repsol YPF, Brazil’s Petrobras and France’s Total SA. The fields produce 70 percent of the gas that’s exported to Brazil, Bolivia’s largest gas buyer. Brazil Plans to Build 3rd Nuclear Plant in 2007 to Meet Demand. The USA should build some, too.