Captain’s Quarters notes that A Paris Criminal Tribunal ruling has pinned the government of Jacques Chirac with responsibility for a 1995 coup in Comoros. Outside the Beltway is also posting on the story.

In case you were wondering where the hey is Comoros, here’s a map: 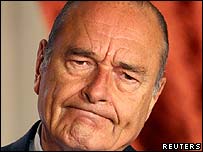 Here’s what the Times UK has to say, Soldiers of fortune go free as judge denounces Chirac over island coup

The court refused a prosecution demand to jail the plotters and instead handed out suspended sentences after hearing them claim that they were acting with the backing of M Chirac’s Government.

Although France has long been accused of secret operations to maintain its influence in Africa, the ruling constituted an unprecedented, public condemnation of these practices. It was particularly embarrassing for M Chirac, who has sought to portray himself as one of the Third World’s greatest advocates in the West.

Chirac used just that pose to protect Saddam Hussein from an American invasion in the early months of 2003, attempting to shield France from the revelations of the Oil-For-Food scam as well as protect its corporate interests in Iraq. The French made quite a show about their disavowal of violence in the service of regime change, skipping over the sixteen unenforced UN Security Council resolutions that Saddam defiantly ignored. Now we find out that the French have no problems with military intervention for regime change, and only differ in the level of honesty involved.

“It is clear that the French secret services knew of the plan for a coup d’état conceived by Robert Denard, both its preparation and execution,” the court said.

“It is also evident that at the very least they did nothing to hinder it and that they therefore allowed it to reach its conclusion. As a consequence, that means political leaders must also have wanted it.”

Indeed. It didn’t even need to have been the “regular” French secret service: Long-time readers of this blog will remember last year’s story on how How Chirac ‘ordered’ his own secret, secret service, a story that surfaced during the trial of a former French secret agent acussed of receiving 1.3 million euros (£880,000, or close to US$1,600,000) in kickbacks from military contractors.

France2 news last evening was totally silent on the Comoros story; instead, they had a long feature on the opening of the new Jacques Chirac museum (“his legacy to the nation”), officially named the Musée du Quai Branly. No, the museum doesn’t have an Oil-For-Food wing, a Clearstream room, or a lunch money cafeteria, but it is a “focus of accusation” since apparently many of the new museum`s artifacts, which include a large commission of Australian Aboriginal art in addition to a large African art collection, were obtained inappropriately.

Update, June 22 Les Muslimerables Get Caught With Their Hands In The Cookie Jar