X-Men: The Last Stand opens this weekend, and much to my surprise Bryan Singer didn’t direct it. This is probably a big mistake.

BTW, even after decades of going to Broadway plays, the one most extraordinary stage performance I’ve had the privilege of seeing was Patrick Stewart when he gave a lecture at Princeton University some 11 years ago. And, as my friend said, “for a 60-yr old short bald guy, he’s really hot!”
Hugh’s easy on the eyes, too.
(clarification: At approx. 5’8″, Patrick Stewart’s not really short. He’s just shorter than I. Hugh’s 6’+)

Throw Hastert from the train. And while you’re at it, throw Murtha, too: 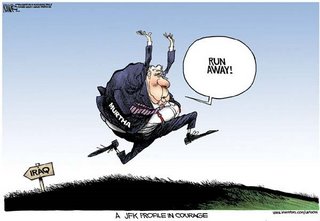 Shakespeare’s Richard III,
whose quote, Talk’st thou to me of ‘ifs’? Thou art a traitor: Off with his head! comes to mind when one reads about poisonous bunch-back’d toad Galloway (via Allah).

and yet more movies, this time for propaganda,
Al Gore documentary rekindles political career. Or maybe not.
Al should take his pseudo science and put it in his lockbox. That way it won’t get wet when the water rises.
Update: Al now says he went to Cannes when he was 15 to study the existentialists – Sartre, Camus. What a crock of hooey.

Not that Cannes is known for its philosophical depth, but as Betsy asks,

Is that what it takes to win over a red state, the goal of any victory-seeking Democrat in 2008? I doubt it.

For your inner X-men geek fantasy: Being invisible ‘a possibility’.

Feds cut off phone tax after 108 years. Of course, they have another tax at the ready. Speaking of taxes,

Taxpayers are responsible for more than $500,000 per household for unfunded financial promises made by federal, state and local governments. How the debt breaks down:

Take my advice and plan accordingly because you can’t expect any kind of retirement benefit to come from the government.

The recipe of the week.

At the blogs,
friend of this blog Philomathean posts on A House Divided, where a physicist found out that

there are not many shades of gray in the political blogosphere,

which you probably knew, but what makes this finding interesting is that he studied a huge network. Read all of Philomathean’s post.

NOW IT SEEMS that for the AP, the fact that Iraqis laugh at their government is bad news.

I’m not the only former ACLU supporter who has turned against them. As Jay said, what better time than Memorial Day weekend to get behind this cause?

As always, All Things Beautiful has a great post.

The Anchoress is underwhelmed by the prospect of The Vaginal Speculum Spectacular and other such things.

At times, we live in a world that increasingly resembles a Salvador Dali painting.