Starting in a light mode, The Joe Wilson and Valerie Plame “Solitude” Tour, via Beautiful Atrocities, who has the breaking news on Ugly Betty. 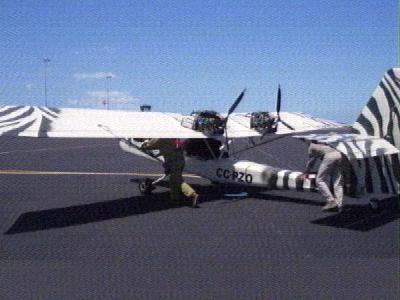 Elephants in Academia posts about Hugo’s friends, who might prove to be fickle. Ollanta, for instance, now denies links with Chávez. Hugo’s busy in Bolivia, counseling Evo after Evo nationalized the gas industry. The nationalization didn’t go over well with Lula because

and now Lula’s drawing a barrage of criticism here for what many consider Brazil’s weak response to Evo’s move.

But Hugo’s friends continue to buy him lunch: Sigmund, Carl and Alfred just emailed this beaut (emphasis mine):

When Mr Chavez visits the UK later this month his lunch with Ken Livingstone is one stop during a hectic private visit which will see him meet MPs, unions, and prospective investors.

The guy’s nationalizing British assets, and Ken’s rounding up prospective investors for him?? If they hold the lunch on a barge, they could call it a ship of fools. Maybe Ken needs oil?
I don’t usually like Rush Limbaugh, but he’s right on this: It’s Big Dictator, Not Big Oil Robber Barons, via Maria.

Today’s articles from Maria
While the UN guy who said “Americans were stingy” writes in today’s WSJ and lays a guilt trip and the Beeb says in its newscast that the UN is running out of money, thank goodness there’s Claudia Rosett: Kofi Annan’s $500,000 conflict of interest:

Here’s one for the new ethics office at the United Nations: Not only do we now know that Secretary-General Kofi Annan accepted a $500,000 prize from the ruler of Dubai, courtesy of a judges’ panel rife with U.N. connections, one member of which Annan then appointed to a high U.N. job. Less well known is that Annan was advised to take the prize money by another senior U.N. official, Mark Malloch Brown—according to Malloch Brown himself in an interview this past February.

Since then, Annan has promoted Malloch Brown from U.N. chief of staff to the U.N.’s number-two post of deputy secretary-general. With role models like these in the executive suite, small wonder the U.N. remains gridlocked over reform.

The UN is beyond reform.