We saw (loud music alert) Mission Impossible 3. It was, as one would expect, big on explosions, loud noise, flipping cars, and all the sort of things one would expect from action movies. It was a lot better than karate movie MI2. As the title says, there’s a number of impossible things happening, among which is kidnapping someone from Vatican City, one of the most guarded places on this planet.

Ethan Hunt, the hero (need we say, played by Tom Cruise, who also produced the movie), is on screen for 95% of the time. Ethan does a lot of running, jumping, yelling, and a little crying, but at least he didn’t scream like a 12-yr-old girl and didn’t jump on Orah’s couch.

Tom Cruise’s presence was mitigated by the presence of Ving Rhames, Laurence Fishburne (who gained a little weight after exiting The Matrix), and a cute guy with a British accent who drives the get-away cars. There’s a satisfying moment when Tom Cruise’s character gets the poop knocked out of him by a very butch Truman Capote (played by Phillip Seymor Hoffman, whose character in MI3 is named Owen Davian). Of course, the Mission Impossible theme remains The Best music theme of a TV and movie series.

The movie also has a radical new approach for curing killer migraines. One can safely say that MI3 provides the Mythbusters enough material for a whole season’s worth of experiments.

At one point in the film Ethan kidnaps Truman Capote Owen and ties him up to a seat in an airplane. “24” fans would scoff at what happens next: Ethan’s idea of interrogating a hostile prisoner is to ask silly questions, allow the prisoner to threaten Ethan and his family, and get his panties bunched in a knot over the threats. The enraged (and out of control) Ethan drags Owen over a floor trap, opens the landing chute of the plane and starts cutting the plastic thingies holding Owen while yelling threats and questions.

Of course that didn’t work.

Which brings us to the question:
WWJBD? What would Jack Bauer do?
Jack Bauer would have, first of all, duck-taped Owen’s mouth until it was time for Owen to speak.
Jack would have remained silent for most of the flight. That’s one of Jack’s good points. He’s a strong and silent type. Not one for chit-chat, Jack.
When it was time to ask questions, Jack would have remained calm, and explained what information was required from Owen.
If, after removing the duck tape (and a significant amount of facial hair stubble) from Owen the information was not forthcoming, Jack would have shot Owen in a sensitive spot.
Jack would also have one of his associates administer some pharmaceuticals.
If Owen, like Professor Robocop, still wouldn’t talk, Jack then might have hung Owen over the landing gear and allowed Owen to enjoy some fresh air.
Jack definitely would have waited a while before cutting those plastic ties.
By the time Owen’s nose was thisclose to the tarmac, I bet you that Owen would have been singing louder than the Three Tenors at the Baths of Caracalla.

But then the movie would be over and, later on, viewers would have not been thinking of John Cleese’s immortal line,

How you English say, I one more time-a unclog my nose in your direction, sons of a window-dresser!

Update:
A friend emailed saying, not even Jack would make the bad guys fly standing up. 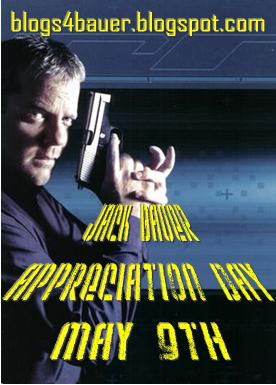 Please note I made a correction on the above post since the sentence on Mythbusters didn’t take when I first posted.