French politics as a Chinese box:

As promised yesterday, I translated the flow chart from Le Monde. Please note that I completely lack photoshop skills so I did it by hand (it took me less time than to actually learn how to edit the chart. Now, be kind.) Click on photo: 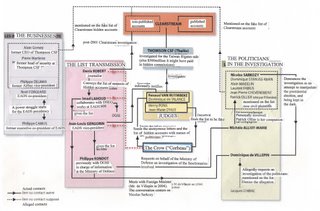 In the meantime, Bremmer mentions that

A poll in Le Parisien today showed that only 43 percent of the public believes the affaire to be serious.

L’Ombre de l’olivier is taking a skeptical look at the whole thing, and links to an article that says that the French intelligence service DSGC agent in charge of the investigation that supposedly found Jacques’s Japanese bank account (link in French) now says he was never in charge of any such investigation.

In other words, French politics as usual.