Douglas Hanson asks some questions on the yellowcake connection:

Speaking of dealing in commodities, this whole affair brings us back to square one and Mary McCarthy. One of her previous employers was Beri, SA. Possibly by coincidence Beri provides a Mineral Extraction Risk Assessment service for up to 145 countries that are expected to show rapid growth in oil, gas, and mineral extraction capacity. If one had advance access to economic intelligence and had fostered close business ties over the years with uranium producers, huge financial gains would be possible. Could the Wilson-McCarthy-Africa connection may indicate another instance of US intelligence and Foreign Service personnel taking advantage of regulatory loopholes and lax security in third world countries for personal gain?

A. J. Strata read Hanson’s article, and looks at Rockefeller, Joe Wilson and Niger Uranium, which also includes Paul Volker and Rockefeller’s grandaughter Miranda Duncan.
Update It was obvious from the first that the press, in taking Wilson and Plame at their own estimation, was fashioning a rod for its own back.

Where to park while you’re flying standing up?
Here: 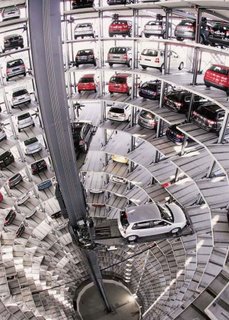 I don’t see any Hummers in that picture.
In any case, Traveling the Road to Wellness apparently doesn’t include standing-room-only flights and stacked parking. Or a man who argued with workers at a Cleveland airport ticket counter on Thursday, before grabbing an officer’s gun and shooting a patrolman.

A mini-controversy erupted this week over the concluding title card on writer-director Paul Greengrass’ “United 93,” which had apparently read during preview screenings, “America’s war on terror had begun.”

This title card was recently changed to, “Dedicated to the memory of all those who lost their lives on Sept. 11, 2001.”

Because Christians won’t issue a fatwa to kill you for doing stuff like this: ‘Jesus with erection’ ignites outrage. Student newspaper publishes drawings in response to Muhammad ‘toons. (NOT suitable for work) The Jesus Cartoons. Dean has the Spirit.

Australian research shows mobile phones affect brain function especially if you are driving while talking. HANG UP, SHUT UP, AND DRIVE.

‘No means yes’ – Kenyan MP. I want to know what the American women’s movement position is on this.

Maria also sent a link to My Heritage.org.

In a lighter mode,
more news about the cutest wild animals on earth: China Releases Panda Into the Wild