As The Economist said (emphasis added),

The delusion is that preserving France as it is, in some sort of formaldehyde solution, means preserving jobs for life. Students, as well as unqualified suburban youngsters, do not today face a choice between the new, less protected work contract and a lifelong perch in the bureaucracy. They, by and large, face a choice between already unprotected short-term work and no work at all. And the reason for this, which is also the reason for France’s intractable mass unemployment of nearly 10%, is simple: those permanent life-time jobs are so protected, and hence so difficult to get rid of, that many employers are not creating them any more.

This delusion is accompanied by an equally pernicious myth: that France has more to fear from globalisation, widely held responsible for imposing the sort of insecurity enshrined in the new job contract, than it does to gain. It is true that the forces of global capitalism are not always benign, but nobody has yet found a better way of creating and spreading prosperity.

While last evening’s France2 news assured us that in yesterday’s demonstrations people were not mugged for their cellphones by nameless youths as they were last week, it looks like the youths’s arson habit is still ongoing: 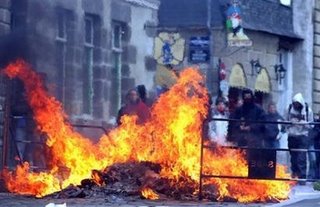 Youths stand behind a fire after a demonstration in Rennes, western France, Tuesday, April 4, 2006. Hundreds of thousands of protesters marched through cities around France, hoping to make their biggest show of strength yet to demand the repeal of a job law that has divided the country, known as CPE, and which would make it easier for employers to fire young workers.(AP Photo / Vincent Michel)

Across the chunnel, they now have cautioned British burglars: ‘Let burglars off with caution’, police told. Next thing they’ll be giving them burglar license ID cards. After retiring from a life of cautioned burglary, they’ll be invited to train as geriatric nurses, of course.

Samizdata tells us that The Economist awaits a new editor

Hopefully the new boss is not the same as the old boss, who, in the last few years, edited a magazine that has increasingly moved away from its liberal tradition, perceptibly found more faith in government action and embraced a whole plethora of questionable agenda – most notably, global warming. I cancelled my subscription some time ago. Here’s hoping the new editor gives cause to take it up again.