Allahpundit has been following the CIA leak(s) story and has everything (and more!) you wanted to know about the story. Today’s WSJ has an editorial on Our Rotten IntelligenCIA:

— a story on which, as I have pointed out, two EU investigations have found no evidence —

has done enormous damage–at a minimum, to our ability to secure future cooperation in the war on terror from countries that don’t want their assistance to be exposed. Likewise, the New York Times wiretapping exposé may have ruined one of our most effective anti-al Qaeda surveillance programs. Ms. McCarthy denies being the source of these stories. But somebody inside the intelligence community was.

At the blogs:
Spanish of the apes: Zapatero’s Socialists will actually introduce a declaration in Parliament calling to grant “human rights” (sic) to apes. 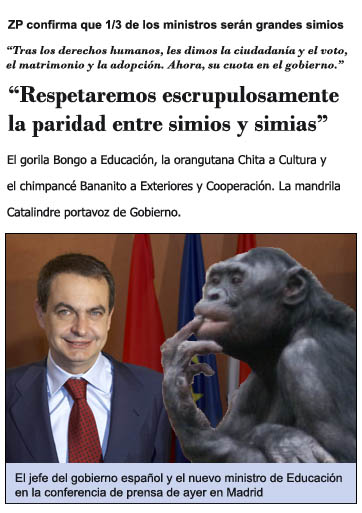 Just wait until those apes find out that they have to fly standing up.

As I was preparing for this article, I asked a friend who is Jewish if it was appropriate to use the term “holocaust” to portray the worldwide violence against women. He was startled. But when I read him the figures in a 2004 policy paper published by the Geneva Center for the Democratic Control of Armed Forces, he said yes, without hesitation.

One United Nations estimate says from 113 million to 200 million women around the world are demographically “missing.” Every year, from 1.5 million to 3 million women and girls lose their lives as a result of gender-based violence or neglect.
. . .
The Islamists are engaged in reviving and spreading a brutal and retrograde body of laws. Wherever the Islamists implement Shariah, or Islamic law, women are hounded from the public arena, denied education and forced into a life of domestic slavery.

Cultural and moral relativists sap our sense of moral outrage by claiming that human rights are a Western invention. Men who abuse women rarely fail to use the vocabulary the relativists have provided them. They claim the right to adhere to an alternative set of values – an “Asian,” “African” or “Islamic” approach to human rights.

This mind-set needs to be broken. A culture that carves the genitals of young girls, hobbles their minds and justifies their physical oppression is not equal to a culture that believes women have the same rights as men.

and don’t miss No Amnesty for Amnesty, where Ron looks at the actual numbers.

Jim looks at (Fill in the Blank) Day.

Today’s articles from Maria:
New hay fever jab to protect against the onslaught of an invisible enemy. In the meantime, go to your local allergist.

Joseph Farrah dislikes Madeline “I can leg-press up to 400 pounds” Albright almost as much as I do. Bill Clinton sucked in his beer belly for his official portrait.

A ‘CRACKDOWN’ THAT WASN’T

One for the “well, whaddaya expect?” file: Life behind the scenes at “The Maury Povich Show” is fit for an episode of the sensational program . Maybe Maury should have had Dov Charney’s lawyer prepare a disclaimer:

NOT-SO-GREEN LIFESTYLES OF THE RICH AND FAMOUS