First, the allergy good news:
People with allergies are less likely to develop brain tumors, even when at times we feel like we’re sneezing our brains out.

For an oversight of the UN’s corruption, perfidy, and criminality, read every word of Claudia Rosett’s article How Corrupt Is the United Nations? You’ll have second thoughts on their Millenium Goals, indeed.

If only Clinton had been a Republican

Getting back to the matter of the ports, I’m still not sure if it was a good idea or a bad one to allow the United Arab Emirates to manage those installations on the east coast. But I’m awfully curious why some of those same people who wanted Bush’s head on a pike weren’t the least bit upset when, during Clinton’s reign, Communist China was granted the authority to manage ports on the west coast.
. . .
Well, there’s no denying that the sleazebags at Enron donated over $400,000 to the party, and kicked in another $100,000 to help pay for the president’s inauguration. And there’s no getting around the fact that Enron’s chairman stayed at the White House on 11 different occasions. Talk about having access! What’s more, the Export-Inport Bank subsidized Enron to the tune of $600 million in a single transaction.

Clearly, where Enron is concerned, the president has a lot to answer for. But the president we’re talking about happens to be Clinton.

I can’t wait for the George Clooney film version of the story: Director John McTiernan was charged Monday with lying to the FBI, becoming the first entertainment industry figure accused in the unfolding federal investigation of wiretapping and other alleged wrongdoing by Hollywood private eye Anthony Pellicano.

Are we French yet?

I was hearing the sound of governance by street protests and mobs. Get used to it. If the Left has its way, that will be our governing method in the U.S. The stakes are far higher than just the outcome of the current immigration debate. The question is not only, how many immigrants, legal or otherwise, are we going to let in the country. The issue is, how do we conduct our politics and settle our differences. If the Left has its way, street mobs will be coming to a city near you.

Look at the photos from the rallies in France, and see the similarities.

And the French are having yet another general strike today again: French public transport and air services are being disrupted in a day of nationwide protests against a new youth employment law. 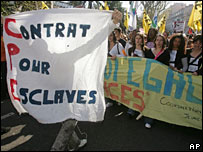 $1 for a bag of airline pretzels? And a blanket? At this rate, one of these days they’ll be introducing non-stop flights where they hand you a parachute so you can sky-dive to your destination.

And in entertainment news, The Shaggy Dog beats Basic Instinct 2. I was hoping Larry the Cable Guy would, but he came close.
Don’t miss the Sam Elliott interview at the same website.