People who want to look at “root causes” of terrorism would do well to examine the death cult aspects: Matthias Küntzel’s article Ahmadinejad’s Demons does:

At the beginning of the war, Iran’s ruling mullahs did not send human beings into the minefields, but rather animals: donkeys, horses, and dogs. But the tactic proved useless: “After a few donkeys had been blown up, the rest ran off in terror,” Mostafa Arki reports in his book Eight Years of War in the Middle East. The donkeys reacted normally–fear of death is natural. The Basiji, on the other hand, marched fearlessly and without complaint to their deaths.
. . .
…during the Iran-Iraq War, Khomeini appropriated the essence of the ritual as a symbolic act and politicized it. He took the inward-directed fervor and channeled it toward the external enemy. He transformed the passive lamentation into active protest. He made the Battle of Karbala the prototype of any fight against tyranny. Indeed, this technique had been used during political demonstrations in 1978, when many Iranian protestors wore funeral shrouds in order to tie the battle of 680 to the contemporary struggle against the shah. In the war against Iraq, the allusions to Karbala were given still greater significance: On the one hand, the scoundrel Yazid, now in the form of Saddam Hussein; on the other, the Prophet’s grandson, Hussein, for whose suffering the time of Shia revenge had finally come.

The power of this story was further reinforced by a theological twist that Khomeini gave it. According to Khomeini, life is worthless and death is the beginning of genuine existence. “The natural world,” he explained in October 1980, “is the lowest element, the scum of creation.
. . .
As Basij ideology and influence enjoy a renaissance under Ahmadinejad, the movement’s belief in the virtues of violent self-sacrifice remains intact. There is no “truth commission” in Iran to investigate the state-planned collective suicide that took place from 1980 to 1988. Instead, every Iranian is taught the virtues of martyrdom from childhood. Obviously, many of them reject the Basij teachings. Still, everyone knows the name of Hossein Fahmideh, who, as a 13-year-old boy during the war, blew himself up in front of an Iraqi tank. His image follows Iranians throughout their day: whether on postage stamps or the currency. If you hold up a 500 Rial bill to the light, it is his face you will see in the watermark. The self-destruction of Fahmideh is depicted as a model of profound faith by the Iranian press. It has been the subject of both an animated film and an episode of the TV series “Children of Paradise.” As a symbol of their readiness to die for the Revolution, Basij groups wear white funeral shrouds over their uniforms during public appearances.
. . .
The Basiji’s cult of self-destruction would be chilling in any country. In the context of the Iranian nuclear program, however, its obsession with martyrdom amounts to a lit fuse. Nowadays, Basiji are sent not into the desert, but rather into the laboratory. Basij students are encouraged to enroll in technical and scientific disciplines. According to a spokesperson for the Revolutionary Guard, the aim is to use the “technical factor” in order to augment “national security.”

What exactly does that mean? Consider that, in December 2001, former Iranian President Hashemi Rafsanjani explained that “the use of even one nuclear bomb inside Israel will destroy everything.” On the other hand, if Israel responded with its own nuclear weapons, it “will only harm the Islamic world. It is not irrational to contemplate such an eventuality.” Rafsanjani thus spelled out a macabre cost-benefit analysis. It might not be possible to destroy Israel without suffering retaliation. But, for Islam, the level of damage Israel could inflict is bearable–only 100,000 or so additional martyrs for Islam.

And Rafsanjani is a member of the moderate, pragmatic wing of the Iranian Revolution; he believes that any conflict ought to have a “worthwhile” outcome. Ahmadinejad, by contrast, is predisposed toward apocalyptic thinking.
. . .
The history of the Basiji shows that we must expect monstrosities from the current Iranian regime.

Iran’s President Mahmoud Ahmadinejad has warned his country’s military would deal with any attack by “cutting the hand of the aggressor”.

Now tell me that Iran’s developing nuclear capabilities are for peaceful purposes. I refer you to Dr. Sanity 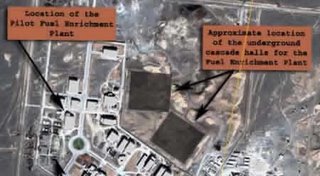