Yesterday I got an email from a guy from Spain inquiring about poll taxes in the USA. As it turns out, his girlfriend, a student at the Universidad Autónoma de Madrid, in a credit course called “Introduction to Political Systems”, heard the professor say that there’s no universal suffrage in the USA because you have to pay a fee in order to vote.

It’s a sad state of affairs when a university professor teaching “Introduction to Political Systems” hasn’t even heard of the Constitution of the United States, specifically the 24th Ammendment, which was ratified in 1964, back when the Autónoma students hadn’t even been born while their parents were under the Generalísimo‘s thumb.

But it’s even sadder when the Autónoma doesn’t even have the sources for the students to find out on their own.

Such is the condition of Old Europe. A nice place to visit, but I’m sure glad I don’t live there.

Narcissism
Sigmund, Carl and Alfred posts on Hollywood, Chapel Hill, and the Arab League (emphasis mine)

. . . the media lost credibility, when in addition to it’s self important navel gazing, they neglect to report the facts or deliberately misrepresent the truth, all in the name of serving an agenda. A fine example is occuring as we speak, Here in North Carolina, there is a deliberate effort by many in the media to not to paint the events at UNC-Chapel Hill last week, as terror. By the perpetrator’s own admission, he planned the attack for two months to plan the attack, considered an act of terror for two years and had in his possession written materials and other documents that clearly indicated his intent.

The media is ‘reporting’ that this may not have been an act of terror. Why? Because doing so ‘wouldn’t be helpful in community building.’ Some (really stupid) Muslim students at UNC-Chapel Hill declared that the act perpetrated by Tahir-azeri that his ‘could not possibly be terror’ because Tahir-azweri ‘doesn’t speak for them.’ Huh? In fact, that is precisely why the act should be labeled terror because the acts were against their interests!

ShrinkWrapped has been looking at Narcissism in the Real World and asks,

At such a dangerous time, when we face implacable enemies who wish to destroy us and our freedoms, why do so many bright people continue to do things that place our nation and our friends at great risk for what seems to be the most minimal, narrow and partisan of advantages?

ShrinkWrapped continues his exploration of this question in a second post. Dr Sanity looks as how Cheap Glory may be attained may be attained by the self-righteous bashing of America, while proudly displaying a casual contempt for the values that this country once stood for. Jonah Goldberg‘s been writing about Hollywood, too, while Roger L. Simon says about Oriana Falacci,

Of course she is hated by the very people who used to adore her. Once the heroine of the left who faced down dictators for an interview (a far more intelligent and far more beautiful Amanpour), she had the courage to question the orthodoxy of European pseudo-progressivism, became despised and continued on nevertheless through her illness to write more and say more.

Eric Fettman of the NY Post notices how the NY Times is Forgetting terror in the NYT’s three-part series, “An Imam in America”.

At other blogs
The Anchoress looks at the Dubai ports story and says it’s A hand poorly played by EVERYONE, while Podhoretz calls it DUBYA’S LUCKY LOSS ON PORTS. Gateway Pundit now wants to know, What About Saudi-Run Ports, Kuwaiti Air & Egypt Cotton?

A must-read from Philomathean, The Terrorist Assembly Line. Atlas has a video of death cult monster Mariam Farahat, a.k.a. Um Nidal

Via Jay, AIR National Board Chairman Parvez Ahmed has been elected to the board of the American Civil Liberties Union of Florida (ACLU-Florida)

Today’s articles
Advice for the new Palestinian PM, from the former head of Mossad, Israel’s intelligence serviceThe article ends with

There are three other points that I hope you will keep in mind. After the Oslo accords of 1993, Israel allowed the Palestinian leaders residing in the Diaspora to assume power, leaving the local leadership to play a secondary role. In the final analysis, this did not serve us well. We must avoid repeating this mistake. The likes of Mashal, who spent his exile in Damascus, should not be catapulted into authority. Secondly, pundits and politicians have made so many pronouncements about Hamas’s future plans that everybody, even important players in your government, are confused about your intentions. Please use your authority to stop this unnecessary stream of words. Finally, as your intelligence chief, I must caution you to keep your distance from Al Qaeda and their operatives and policies. If you do not do this, the Palestinians will become the outlaws of the Middle East. This will spell certain disaster for us.

Witness Details Moussaoui’s Ambitions: A terrorist financier says the 9/11 plotter had a dream about flying into the White House

‘Mom,’ ‘dad’ to be axed from school textbooks?

Former German Chancellor Helmut Kohl denied a report in a semi-official Iranian daily picked up by Iran Focus which accused him of agreeing with statements made by Iranian President Mahmoud Ahmadinejad on the Holocaust, according to a statement received from the former chancellor’s office.

Witness to the Death of Feminism: Phyllis Chesler on her sisterhood at war.

Are TV cartoons Poisoning Children, Too?

Not surprising, if you’ve been watching BBCA, Internet overtakes TV in Britain

Took them five hundred years or so, but finally Sark Drops Feudalism for Democracy

More on Hollywood, No laughing matter

Also from Maria, I don’t know if this was photoshopped, but apparently not — the story goes that a former US Army sargeant did the translating for the demonstrators: 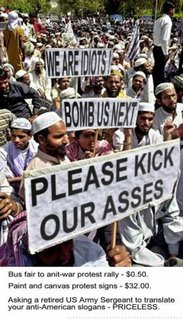 I’ll be blogging later today on one of those charismatic-leader-helping-the-poor-offering-free-health-care-education-adult-literacy-and-job-training-initiatives-that-help-millions-of-[insert country name here]. Update: An Army of Danieles