At the blogs
Via Louisiana Conservative, Hard Astarboard visits the Liberal Church from South Park.

Today’s articles from Maria
This is what believing in Sharia law begets: the destruction of one of the world’s greatest cultural heritage sites: Swiss documentary on Afghanistan: Pakistani, Saudi engineers helped destroy Buddhas

The Bamiyan Buddhas in Afghanistan were destroyed by the Taliban with the help of Pakistani and Saudi engineers.

The film is due to be shown at the National Gallery of Art in Washington on 26 March.

Big Bang unfolded in the blink of an eye

Mel’s latest: Apocalypto Now, about the Mayans and the ecology. At least you can’t blame global warming on the ancient Mayan SUVs.
My question is, had the movie been about Trinidad, would he have called it Apocalypso?

I’ll be blogging some more later if time allows. 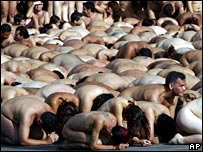 Actors in the news:
‘Law & Order’ actor: I know more about war than troops