It would be funny if it weren’t so tragic: Chávez’s samba school won the Rio de Janeiro carnival’s sambodromo competition.

On the one hand, Hugo has oil money to pay for ads in the NYT touting him as “a-charismatic-leader-helping-the-poor-offering-free-health-care-education-adult-literacy-and-job-training-initiatives-that-help-millions-of-Venezuelans”, an image that the UN, along with Chávez’s ‘banana left’ alliance are happy to promote. 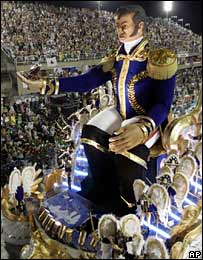 Hugo sends US$500,000+ of Venezuelan oil earnings to a Brazilian Samba club, the Vila Isabel group, which won the sambodromo competition (emphasis mine)

PDVSA will not say how much money was involved, but reports estimate its donation at more than $500,000.

Update 2 Daniel emailed an article from Tal Cual stating that the amount was a whopping $1,500,000

They even had an effigy of Simón Bolívar on one of the floats, in keeping with Hugo’s Bolivarian Revolution. The Beeb has a video titled “Chavez uses samba against US: Venezuela’s president is promoting Latin American ties by sponsoring a samba school at the Rio carnival.”

Now Hugo’s joining the Chinese to launch the Simón Bolívar satellite, the first step on the way to a national space program, at an estimated $500,000,000 (five hundred million US dollars).

I kid you not, folks. Read it and weep: Venezuela kicks off space effort, while China stuffs its gold reserves.

Never mind that this is bad news vis-a-vis Venezuela’s close ties with Iran and the Venezuelan nuclear program, which some are starting to notice. Not that he’s stopped shopping for weapons, either.

Hugo’s also unveiling a South American gas pipeline, which is expected to cost US$20 billion (emphasis mine):

So far it is not clear how the construction costs will be distributed among the contributing governments.

Argentina and Brazil are quietly confident that Venezuela with its oil riches may end up paying more than half of the costs.

China is also looking at building a pipeline from Venezuela through Colombia to a Pacific port.

On the other hand, ponder what $500 million dollars could do for Venezuela’s poor. Look at what a hospital in the middle of Caracas is like. Unemployment in Venezuela increased by 4% in one month. Look at the fact that The official projections of Venezuelan gas production for the next decade indicate that the country will have barely enough natural gas to satisfy its domestic needs

In Venezuela poverty runs at more than 80 percent, people die in state hospitals for lack of the most basic help and the unemployment rate is the second-highest in Latin America.

No matter that the poor are complaining, Chávez’s ‘banana left’ alliance continues to support him. Indeed, theirs is a Carnival for the clueless.

Update Some women are not as cluless, though.
Elephants in Academia posts on the newly-elected President of Chile, Michele Bachelet and the frontrunner in next month’s presidential election in Peru, Lourdes Flores Nano, who don’t want to be associated with Hugo.

Bachelet is not shy about associating with foreign politicians. Two French socialists, particularly Segolene Royale, very visibly joined her in the last week of campaigning before the elections. Bachelet, however, chooses her friends carefully.