IT now remains to be seen whether Harvard’s Faculty of Arts and Sciences is capable of self-critique. Will its members acknowledge their own insularity and excesses, or will they continue down the path of smug self-congratulation and vanity? Harvard’s reputation for disinterested scholarship has been severely gored by the shadowy manipulations of the self-serving cabal who forced Mr. Summers’s premature resignation. That so few of the ostensibly aggrieved faculty members deigned to speak on the record to The Crimson, the student newspaper, illustrates the cagey hypocrisy that permeates fashionable campus leftism, which worships diversity in all things except diversity of thought.

If Harvard cannot correct itself in this crisis, it will signal that academe cannot be trusted to reform itself from within. There is a rising tide of off-campus discontent with the monolithic orthodoxies of humanities departments. David Horowitz, a 1960’s radical turned conservative, has researched the lopsided party registration of humanities professors (who tend to be Democrats like me) and proposed an “academic bill of rights” to guarantee fairness and political balance in the classroom. The conservative radio host Sean Hannity regularly broadcasts students’ justifiable complaints about biased teachers and urges students to take recording devices to class to gather evidence.

These efforts to hold professors accountable are welcome and bracing, but the danger is that such tactics can be abused. Tenure owes its very existence to past intrusions by state legislatures in the curricular business of state universities. If politicians start to meddle in campus governance, academic freedom will be the victim. And when students become snitches, we are heading toward dictatorship by Mao’s Red Guards or Hitler Youth.

Over the last three decades of trendy poststructuralism and postmodernism, American humanities professors fell under the sway of a ruthless guild mentality. Corruption and cronyism became systemic, spread by the ostentatious conference circuit and the new humanities centers of the 1980’s. Harvard did not begin that blight but became an extreme example of it. Amid the ruins of the Summers presidency, there is a tremendous opportunity for recovery and renewal of the humanities. Which way will Harvard go?

I grew up reading Art Buchwald’s columns, and I’m sad to read this The Final Days of Art Buchwald: A Visit

[School] choice for me but not for you, in case you wondered.

Dick Morris takes a swing at Bill the Lobbyist, who’s funded by a certain Sheik. Of course, Hillary knew nothing about it.
Yeah, right.

Terrorist: Israel behind world’s violence
Warns his group will launch ‘third intifada’ against Jewish state, and An Arab-American speaks out. Dr Krauthammer’s one of the twelve people who saw Syriana, and says Syriana feeds our enemies hatred

In my naivete, I used to think that Hollywood had achieved its nadir with Oliver Stone’s “JFK,” a film that taught a generation of Americans that President Kennedy was assassinated by the CIA and the FBI in collaboration with Lyndon Johnson. But at least it was for domestic consumption, an internal affair of only marginal interest to other countries. “Syriana,” however, is meant for export, carrying the most vicious and pernicious mendacities about America to a receptive world.

Most liberalism is angst- and guilt-ridden, seeing moral equivalence everywhere. “Syriana” is of a different species entirely — a pathological variety that burns with the certainty of its malign anti-Americanism. Osama bin Laden could not have scripted this film with more conviction.

In a lighter vein, Your Dog Will Cost You More Than a Mercedes

Pat Robertson‘s been voted off the Board.

Also from Maria,
A study in white: 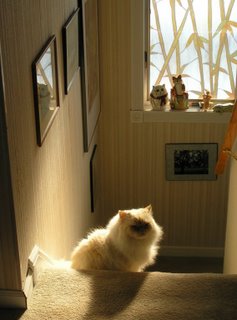