As they say, “Developing . . .”
Check later for updates

Police Lt. Col. Falah al-Mohammedawi said was handed over to the Iraqi Islamic Party office in Amiriya, western Baghdad, by an unknown group. She was later turned over to the Americans and was believed to be in the heavily fortified Green Zone, he said.

Sunni Arab politician Tariq al-Hashimi told reporters Ms Carroll was released earlier on Thursday and was with him. Details are still coming in.

Ms Carroll’s release comes a week after the freeing of three other western hostages, a Briton and two Canadians.

An Iraqi government source quoted by Reuters news agency said that Ms Carroll was in good health and being cared for in Baghdad’s heavily guarded government compound, the Green Zone.
. . .
Ms Carroll is the fourth Western hostage being held in Iraq to be freed in eight days. 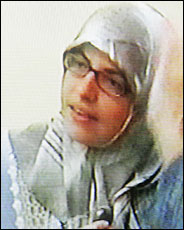 A spokesman for the Iraqi Islamic Party, a predominantly Sunni group, said Ms. Carroll was handed over to party officials at a site in western Baghdad. They then turned her over to American authorities, who whisked her to the heavily fortified Green Zone, according to an official in the Interior Ministry.

A leader of the party, Dr. Tariq Al-hashmi said that he had participated in winning the release of Ms. Carroll, according to an official in the Iraqi Interior Ministry.