My first selection was recommended to me by Sigmund, Carl and Alfred:

Islam expanded through war and opression, and that is its legacy. The editor review featured by Amazon says,

This unique, extensive compilation includes Muslim theological and juridical texts, eyewitness historical accounts by both Muslim and non-Muslim chroniclers, and essays by preeminent scholars analyzing jihad war and the ruling conditions imposed upon the non-Muslim peoples conquered by jihad campaigns. The Legacy of Jihad reveals how, for well over a millennium, across three continents—Asia, Africa, and Europe—non-Muslims who were vanquished by jihad wars, became forced tributaries (called dhimmi in Arabic), in lieu of being slain. Under the dhimmi religious caste system, non-Muslims were subjected to legal and financial oppression, as well as social isolation. Extensive primary and secondary source materials, many translated here for the first time into English, are presented, making clear that jihad conquests were brutal, imperialist advances, which spurred waves of Muslims to expropriate a vast expanse of lands and subdue millions of indigenous peoples. Finally, the book examines how jihad war, as a permanent and uniquely Islamic institution, ultimately regulates the relations of Muslims with non-Muslims to this day. Scholars, educators, and interested lay readers will find this collection an invaluable resource.

The descriptions of Islam’s history in Dr. Bostom’s book are hard reading, but essential to a knowledge of the history of Islam. Meticulously documented enough to qualify as an academic book, it is absorbing and fascinating to the average reader. I can’t stress enough that it’s a must-read.

My choice:
Faced with this, 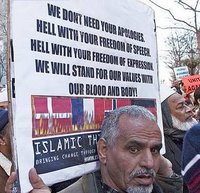 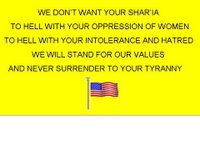 Carnival #40 is hosted by The Opinion Mill, in the Twilight Zone!