Olympics vs dog show, Iran & Latin America, plus today’s articles
Last night I sat down to watch the Olympics. Rather than sports, there was a photo-op of some metrosexual teen claiming that “the republicans won’t like him” and that he was going to rock the ice-skating establishment. After several minutes of yammering like a Hollywoodwannabe, they showed him on the ice: he was going to skate to Saint-Saens’s Dying Swan while wearing a red glove on his right hand (obviously signifying the swan’s head, yet reminiscent of the gloved one). Enough. The dog show was on, and it was time for the hound group. They had a darling bloodhound and a fine basset but those didn’t make the finals. 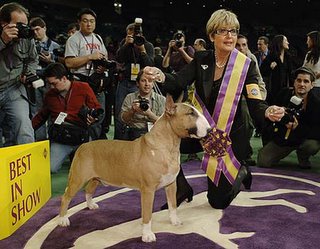 Not a basset, but nice anyway.

More on the Iran-Latin America ties
Academic Elephant sent Latin America’s leftist regimes get cozy with Iran: Cuba, Venezuela, and Bolivia want stronger ties with Iran, but all face internal hurdles
Just because you ignore it, it won’t go away.

Like I predicted the other day, it’s Cheney-time at the late night shows. This article highlights the absurdness of it all: Columnist says hunting incident was signal to Libby not to testify. Tony Blankley puts the thing in perspective.

Maria also sent a Burt Prelutsky article where he proposes getting rid of the Senate. I certainly not agree for several reasons, including the need for having a ready source of blogging material. Joseph Farrah‘s being too kind to Algore.